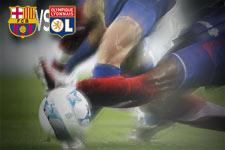 OL’s new European campaign kicks off on Wednesday night in style at Barcelona’s prestigious Nou Camp. Barça v.2007-08 still seems to be finding its feet. The Lyonnais have an amazing challenge ahead of them…
The Blaugrana are incontestably among the favourites to take out the Champions League this season. They have added a fantastic forward to the 3 they already had – Thierry Henry now plays alongside Messi, Ronaldinho and Eto’o (who has been out injured for some weeks). Their summer recruiting also included 2 other big names: Eric Abidal and Yaya Touré. At Barça, there is the present as well as the weight of the past. The club, founded in 1899, is overflowing with trophies and honours; the club has won every European cup at least once! The club has become, withy the passage of time, “more than a club”. But this doesn’t stop them from being human; they managed to concede the title last year after leading most of the way as well as under-performing in the Champions League, losing to Liverpool in the quarter-final. And they have had a slow start to the season, securing just 5 from a possible 9 points.

OL has visited the Nou Camp before, in 2001-02. The Catalans won 2-0 in the last 10 minutes despite Grégory Coupet’s string of awesome saves. Since then OL has performed well on the European stage, reaching the quarter-finals 3 times and the last 16 once. But the question remains: can the 6-time French champions worry Thuram and co on their home ground? Can OL vie with Barça for supremacy in group E? And most importantly, will OL qualify for the last 16? In the last 4 campaigns, OL has had a huge side in its group: Bayern, Manchester United or Real Madrid. Each time, the French kings finished in 1st place and qualified quickly. And only Sir Alex Ferguson’s Englishmen have really troubled OL, taking 4 points from the 2 matches.

Destination Barcelona. Juninho and co have rediscovered the form that has kept them champions of France; they have won 4 on the trot, counting the Metz game. Benzema is knocking in goal after goal; Juninho is smiling again; Toulalan is winning everything in the middle; Bodmer has found his feet in defence; Vercoutre has settled; Govou gives 100% as he always has…; Ben Arfa has shown some magical touches with his left boot… OL has shifted up a bracket in L1. But won’t the absences of Coupet, Cris and Fred, as well as the departures of Malouda, Tiago and Abidal, handicap the Olympiens when faced with more experienced and prestigious opposition? Sure, Bodmer, Keita and especially Grosso have considerable experience, as does manager Alain Perrin, who managed OM in the Champions League. But the doubts float around and even Coupet and Juninho themselves have said that the squad isn’t as strong as it used to be.

[IMG42507#R]To destabilize the Catalan outfit, OL will have deny them the ball, and pressure them as a team. Should Ronaldinho and co succeed in retaining possession, they have an arsenal of attacking option including Deco, Iniesta and the famous attacking trio. They’ll have to watch out for Messi’s explosive runs on the right, from where he often cuts in on his left foot to storm through the middle. The battle of midfield will be decisive, without forgetting the defensive concentration required. Then, with the awesome talents of “Juni” and Benzema, there will be considerable options to get the better of Valdez.

A huge football match is in the offing. A spectacle at the Nou Camp. And while OL is undefeated in 13 consecutive group phase matches in the Champions League, a loss will not be catastrophic, which is another reason why the players need to free themselves up and unleash themselves once again on the European stage. OL is a quiet achiever… but with high ambiti0ons, as President Jean-Michel Aulas confirmed in the columns of Le Progrès.
Facebook
Tweet
Forum