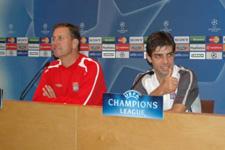 Barça’s start to the season?
“I think the league got going late. The side isn’t at 100% yet. But Barça is still Barça. You always have to be careful.”

Is it an advantage for OL?
“Physically, possibly. But it’s tough here. At home, the team has the fans on its side. They won 3-1 in the league. It’s always tough at the Nou Camp. Barça will be ready to beat us.”

The size of the field?
“Barcelona always maintain possession and dictate play. That favours playing down the wings. We need to win the ball and hang onto it. We’re used to playing in massive arenas.”

Will the defeat in 2001 give you any complexes on Wednesday night?
“That’s in the past. It has nothing to do with tomorrow night. We’ll see what happens on the pitch – we respect all our adversaries. Complexes just make things more difficult.”

Is it an advantage to be up against players you know well?
“I don’t think so. It’s the same for them. They’re big players, experienced. They deservedly wear the shirt of a huge club. We know Abidal, we know his qualities. We’ll try to exploit his weaknesses.”

What’s the objective?
“The President has the right to think and say what he pleases. For me, the most important thing is Wednesday’s match. After that, we’ll see.”

Did the Metz match change things?
“Our preparation for taking on Barcelona began before that match. They are 2 different realities, they are incomparable.”

Is this the ideal moment to take on Barcelona?
“It’s usually more interesting to take on a Spanish side early on in the campaign. But their quality is still there; they are among the favourites. It’ll be interesting to see how my tam reacts to not being favourites for the first time this season.”

Have you conceded top spot in the group?
“No, that’s just how it is. It doesn’t mean we’ve abandoned our ambitions. We have many assets, bot individual and collective. And we’ll use them. Barça? I haven’t seen many weaknesses. They’re always pushing forward and have talent in every position. You know they’ll be tough at home, too. It’s hard to know what’ll happen in this match. We won’t hold back, because every match is about balance. Defend well while exploiting our attacking power. It’ll be key to attack well without getting hit on the counter.”

Is the big win over Metz an advantage or not?
“Everyone knows that matches are played out on details. WE just have to rely on the quality of our game.”

Benzema?
“His success is very recent – he hasn’t had the time to encounter the downside of his fame; we’ll see how he goes in the Champions League. He will learn a lot but I think he’s ready for this kind of match.”

Does OL have less to lose than Barça does?
“You know how important home games are. Barça will be under more pressure. We just need to unleash ourselves and go for the upset.”