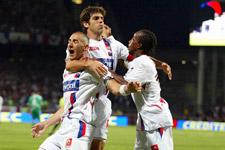 The last hat trick? Juninho against Auxerre on October 19 during season 2002-03.

The last time OL scored so quickly? Juninho against on February 5 2005. Juni opened the scoring with a free kick in the 2nd minute.
Facebook
Tweet
Forum