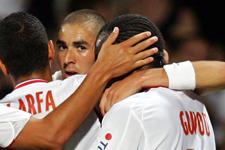 The first perk of the 5-1 thumping that the Lyonnais dished out in Metz (their 4th win in a row): they have climbed to 2nd place on the table, 1 point behind Nancy. The numbers look good, and the side’s spirits too.
Thanks to this win, the Olympiens are in the best possible position for the impending Champions League clash in Barcelona (September 19). 5 goals scored, just 1 conceded, the Benzema-Ben Arfa pairing finally starting to live up to its long-awaited potential, Juninho back to scoring ways through a trademark free kick and Rémy Vercoutre rock-solid in goals. Alain Perrin couldn’t have hoped for more after a 2-week break that had the OL manager slightly worried.

Sure Barcelona will provide a different calibre of opposition on Tuesday but it still seems that the trip to Metz was the ideal preparation for the start of OL’s Champions League campaign in Cataluna.

And the Barcelona observers at Saint-Symphorien must have noted with some worry the name of a certain Karim Benzema. On the pitch in Metz, Benzema missed nothing, scoring a hat trick from his 5 scoring chances - putting him clear in front on the scorers chart. After a start to the season where he scored 5 goals in 6 games, he has put the foot down even further! 2 powerful finishes, first with the left and then the right and then with a delicate chip: the man can do everything! He now has scored 8 goals in 7 matches for an average of 1.1 goals per match! Benzema “is on fire”!

Without taking anything away from the young Lyonnais, it must be noted that he benefited from some great team play. France’s top scorer always says that his goals only happen because of the team. The immensely talented youngster is very modest and precociously mature. For his 3 goals, Benzema won 3 one-on-ones with Marichez, making the most of passes from Govou (5’) and Ben Arfa on 2 occasions (36’ and 38’).

All the signs would indicate that that the complicity between Benzema and Ben Arfa could well permit OL to dream of huge success should it continue on the same track. With a one-two straight from the OL Youth Academy, the 2 young Lyonnais conspired and Ben Arfa made the most of Benzema’s ball to score his first of the season (58’).

The other positive point from the night: Juninho rediscovered his legendary precision from free kicks. At the end of the match, 25m out, the Brazilian calmly delivered the ball in the Metz net (88’).
Sure, FC Metz is no FC Barcelona. The Lorrains’ defence allowed OL too many chances to rehearse their routines. And the bill could have been much worse for Milan Thomas and co. Karim Benzema fired wide (12’ and 32’) then missed his cut-back cross for Juninho (55’). The Brazilian missed the target from 25m (18’) then forced 2 huge saves from Marichez (77’ and 78’). Kim Källström fired wide (19’) then over (27’). Govou slammed the ball into the bar from a Benzema cross (66’). Grosso’s 2 efforts both ended up in the keeper’s gloves (66’ and 77’). Referee Monsieur Malige could also have awarded Hatem Ben Arfa a pour after he was fouled by Bassong (48’).

Rémy Vercoutre also made the most of the trip to build his confidence. 2 weeks after his error against Le Mans, the OL keeper was in imperious form. There was nothing he could do when Gueye’s lob slightly narrowed the scoreline (46’), but he proved impeccable at all other times with big saves in the 16th and 44th minutes. Alain Perrin also wanted to give Cleber Anderson some game time, and OL’s domination gave him the chance to field the Brazilian for 10 minutes at the end of the match.

So it was a win-win-win night. And while the Champions League fixture in Spain next week will be much more complicated, the young Lyonnais can praise themselves for a job well done.
Videos
Facebook
Tweet
Forum
Videos