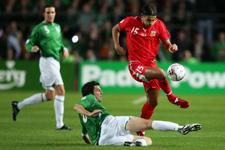 3 Lyonnais saw game time yesterday, with varying results.
[IMG41391#L]In Podgorica, the Sweden side won 2-1 in a friendly. They went behind to a strike from AS Roma’s Mirko Vucinic but then bounced back, scoring 2 goals in the second half through Markus Rosenberg and Rade Prica.
Kim Källström started the match, playing 66 minutes before being replaced by Tobias Linderoth.

[IMG41962#L]In Prague, the Czech Republic took a huge step towards qualification for Euro 2008 by beating the Republic of Ireland 1-0. AC Milan defender Marek Jankulovski scored the only goal of the game. A starter, Milan Baros played 90 minutes before making way for Jarolím in stoppage time.

[IMG41392#L]At the Parc des Princes, Karim Benzema replaced Abidal 13 minutes from the end of the match that France lost to Scotland.
Four Rangers players featured in the Scottish side (Weir, Hutton, Ferguson and McCulloch).
The French are now 3rd in group B; in order to qualify for Euro 2008, they have to win their last 3 matches.

[IMG42453#L]Earlier that afternoon, Italy won a precious 2-1 victory in the Ukraine. Fabio Grosso did not take part in the match.
Facebook
Tweet
Forum