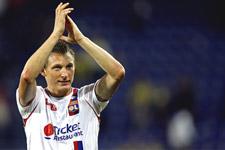 National team news…
[IMG41391#L]Kim Källström came on in the 69th minute in the Sweden-Denmark match but couldn’t make a difference to the scoreline, which remained 0-0 at the final whistle.

[IMG41962#L]Without Milan Baros, recovering from back pain since last Wednesday, the Czechs easily accounted for San Marino 3-0. The Czech Republic is in 2nd place in group D ahead of the clash with the Republic of Ireland on Wednesday September 12.

[IMG42452#L]Kader Keita the Ivory Coast Elephants played out a 0-0 draw in Gabon on Saturday at 15:00. The point gained assured the Ivorians of the top spot in group 1 and of participation in the finals phase of CAN 2008.

[IMG42085#L]There will be no CAN for Nadir Belhadj and Algeria. Belhadj was a starter in the position of attacking left-sided midfielder in match his side lost 2-1 to Gambia.

[IMG41392#L]Jérémy Toulalan came on in the 85th minute in place of Franck Ribéry in the France-Italy Euro 2008 qualifying match (0-0). François Clerc, Karim Benzema and Sidney didn’t take the field at the San Siro… and nor did Fabio Grosso.

Les Bleus remain atop group B with 19 points. Scotland (18 points) are in 2nd thanks to their 3-1 win in Lithuania, pushing Italy back to 3rd spot (17 points). The next match is France-Scotland in Paris on Wednesday night.