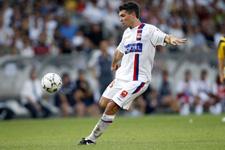 Alain Perrin has used 20 players since the official start to the season… Toulalan is the only one to have played every minute of all 7 matches…
630 possible minutes plus time added on? Only one Lyonnais can make this claim: Jérémy Toulalan. He is closely followed by Karim Benzema with 617 minutes. Rémy Vercoutre is 3rd with 540 minutes; 540 from a possible 540 in the league. 6 successive league games is, for Rémy, a first at OL. His career record? With Montpellier in 2001-02, he played 11 L1 matches in a row (rounds 1-11).

Mathieu Bodmer has played 450 of his 474 minutes in central defence.

The game time for the 20 Lyonnais is as follows:

A reminder: Coupet, Cris, Müller, Ben Arfa, Juninho, Squillaci, Govou and Grosso have been or still are injured. Not to mention Fred. As for Cleber Anderson, he is still catching up after his late arrival…
Facebook
Tweet
Forum