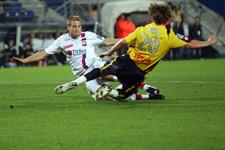 The Lyonnais had made their mission clear: to be among the top places in the league, they had to win their first away points of the season by getting a result in Sochaux. Mission accomplished!
Just a few days before hosting Le Mans on Saturday at 20:00, the Olympiens won a victory in the Doubs that does them as much good in terms of morale as arithmetic. After opening the scoring, they showed strength of character and sheer conviction in taking the lead once again and then controlling the remainder of the game. There was a marked improvement, that’s for sure! It’s not perfect yet, and after 6 official matches, and in fact it would be astonishing if it were. One thing is for sure: OL definitely seems to be on the right track. After this winning trip to Sochaux, the points won column has taken on a much healthier glow.

While OL still hasn’t fully developed its understandings and set plays and while Alain Perrin is still having to work his way around a swathe of injuries, with the addition last night of Fabio Santos, who took a knock, the OL manager must be rejoicing at the strong vein of form that Karim Benzema has found. In Sochaux, the France international scored his 4th league goal in 5 matches, joining Bellion, Vahirua, Saïfi, De Melo, Piquionne and Audel at the top of the scorers charts. Just like against Saint-Etienne, he managed to be in the right place at the right time to score into an empty net. After a cross from Jérémy Toulalan and an effort from Sidney Govou, Anthony Réveillère fired straight at Teddy Richert. The ball rebounded for Benzema who had no trouble in scoring his second goal in 3 days (19’).

The minutes following a goal are often the toughest to get through. The Lyonnais made a meal of it and paid the price. Barely a minute after Benzema had scored, Sène released Quercia in depth. Bodmer held the Doubs striker back, conceding a penalty that Birsa had no trouble in converting, firing to the right of the diving Vercoutre (21’).

Frédéric Hantz’s men hadn’t threatened before this point, save for Birsa’s effort that was headed clear by… Bodmer (7’). Aligned in a 4-3-3, with the inclusion in midfield of the Brazilian Fabio Santos, alongside Jérémy Toulalan and Kim Källström and behind a three-pronged attack featuring Govou – Benzema – Baros, the French champions had a strong start to the game. Kim Källström took a free kick to the far post but Karim Benzema screwed his volley wide (4’). Milan Baros got on the end of a perfect cross from Fabio Grosso but fired over (13’).

Sochaux’s equaliser did nothing to dim OL’s scoring intentions. Richert was forced to dive on shots from Benzema (28’ and 39’) and Källström (38’). Govou, in turn, fired wide (40’).
In fact the Lyonnais were pushing so hard to score that they opened up at the back and allowed Dalmat to cross for Erding, whose header missed the target (30’). Birsa crossed along the goal line and Sène came close to giving the Doubistes the lead (31’). These same players almost made the difference just before the break; Dalmat’s powerful shot drew a spectacular diving save from Rémy Vercoutre (41’). And then he did it again, stretching and diving high and wide to turn Birsa’s thundering free kick out for a corner (54’).

Did the OL keeper’s fine saves knock the stuffing out of the local side? They did in any case allow the Olympiens to keep their hopes of their first away victory of the season alive. And it didn’t take long for their hopes to materialise; Kim Källström’s corner was poorly cleared and Mathieu Bodmer surged through and slammed home to give his side the lead (56’). And in doing so, the former Lille player redeemed himself for the penalty conceded earlier in the match. Karim Benzema could have made the scoreline wider and taken sole lead of the scorers charts but he scuffed his shot (61’) then fired straight at Teddy Richert (64’).

Like against Saint-Etienne, Alain Perrin’ men controlled the last 30 minutes of the match, conceding only a few chances to the Sochaliens: on two occasions, Quercia, alone at the far post, couldn’t get his headers on target (65’ and 67’).

Thanks to this win, the French champions gained a lot more than 1 place on the table (they are now ranked 9th, 4 point adrift of leaders Nancy). They also collected their second victory in 3 days, the ideal preparation for the reception of Le Mans on Saturday. Though they will be very wary getting big-headed, the Lyonnais can certainly approach their next match with calm confidence and the feeling of a job well done. They just need to keep up the good work – and that’s often the most difficult thing.
Facebook
Tweet
Forum