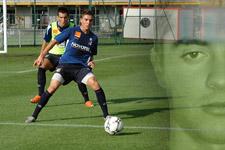 Anthony Mounier isn’t yet 20 years old but just signed his first professional contract, a deal linking him to OL for 3 years, at the start of the season. He is doing everything he can to make a success of his career. He is our tipster for round 5…
Intelligent, polite, kind, well adjusted, attentive, poised, reflective, a hard worker… Anthony is a young man of many qualities. The native of Aubenas left his home town of Etoile-sur-Rhône (near Valence) for boarding school in Lyon at age 12 before joining the OL Youth Academy at 15. “I started football at 4. I’ve been at OL since I was 12. I’ve only ever played this sport. I began with my club US Veore, the same club as Florent Laville>”

From early on his life was marked by his father’s death when he was 4 years old. “It was tough. I’m very close to my mum, who keeps in close contact. I call her everyday and always after a match. I also have a younger brother who plays for the U-15 side at Rhône-Vallée ».

Training, sleeping then the cinema or time with friends, not to mention time spent alone, which doesn’t bother him. “I like being alone; it’s no problem for me.” “Moune” ended his studies after getting his Bac S 2 years ago. He signed his first professional contract at the end of last year and has had some adjustments to make in his new life. “Before, I had school. It leaves a big hole when you finish…”

The left-footer often finds a magic touch on the field but still has very concrete ideas. “I don’t just do whatever. I’m responsible. I give my self every chance of getting there. I know what I want. So I watch my diet for example… and I work hard every day to improve and deal with my shortcomings. I know I need to be stronger and be more solid physically so I can protect the ball better. In 2 months, I’ve learned a lot. I need to improve my vision in the game – everything goes so much faster at this level. I need to play more simply and to channel my efforts as well as managing my good times and bad times.” Anthony always had natural athletic abilities like his capacity to run all day and never run out of breath. “I’ve always been like that. As a kid I won all the cross-country races.”

A keen TV spectator of tennis, rugby and the Tour de France, Anthony put in some fine performances in the Peace Cup. “I was happy with my matches. But I didn’t get worked up about whether I would be in the squad or not. I’m young. Playing in the CFA gives me game time. I’m patient.” Coming on as a sub for the first time on Saturday against Lorient? “Obviously I was very happy. It was the first time. I was very proud. I was warming up when Hatem got injured. I respect the manager’s decisions. ON the bench, I had a great view of the match.”

[IMG41399#R]The derby? “It’s about regional supremacy, a must-win match. I’ve only lost 2 derbies since I’ve been at OL: once with the U-14s and once with the CFA. There’s always a special atmosphere.” What does he want for his 20th birthday on September 27? “An injury-free season. The chance to work and take my first steps in L1 this season. To make my debut for OL, the club where I trained all my life, would be a dream come true.”

Anthony is our tipster for round 5:

Caen – OM: “Marseille. The team isn’t doing so well and really need the points against a promoted side.”

Bordeaux – Lorient: “Draw. Lorient is doing well with some great players. I really liked how they played against us.”

Monaco – Le Mans: “Monaco. They have to confirm their result against Sochaux, even though Le Mans is the form side.”

Nancy – AJA: “Nancy. Auxerre is doing it tough despite their recent victory.”

Rennes – Metz: “Rennes. The arrival of Sylvain will do the team good. Also, Metz hasn’t found the rhythm of L1 yet.”

Strasbourg – Lens: “The Alsatians are having a huge start to the season and they’re scoring a lot. Lens on the other hand haven’t even scored yet.”

OL – ASSE: “We have no choice at home…also, it’s a derby. We have to win.”
Facebook
Tweet
Forum