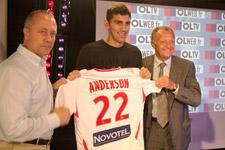 Olympique Lyonnais’ new recruit Cleber Anderson was presented to the press this afternoon after a training session that the Brazilian spent on the sidelines with Robert Duverne.
“He’s not ready to go yet,” explained Alain Perrin. “He won’t be right for the derby against Saint-Etienne as he’s been training by himself for the last month . He also needs to find his feet with his new team-mates.”

So Cleber Anderson Beraldo will have to wait before slotting beside Toto Squillaci. “I’m a right-footed player but playing on the left poses me no problems,” he affirmed. “I know that I’ve come to Lyon to play in that position.” The position shouldn’t bother the Brazilian too much – he has played there for the last 2 seasons. “I saw him play 3 years ago when we recruited Cris,” revealed Bernard Lacombe. “And then we pursued the deal.” President Aulas’ advisor isn’t short on praise for the 12th Brazilian to have signed for OL: “He’s quick, has a good aerial game and can play well out of defence. He’s a bit like Bayern’s Lucio .”

Cleber Anderson has joined the 6-time French champions for 4 seasons and a sum of €4m. At OL, he will be charged with the heavy responsibility of replacing Cris, who injured his right knee and will be out for 6 months; a responsibility that hardly bothers the OL number 22: “I know what Cris means to Lyon. I hope to deputise for him in the best possible way.” It has been a career move guided by sporting ambition as well as medical exigencies. As President Jean-Michel Aulas said: “What makes the difference is conjunction of OL’s status and the human element.” Cleber Anderson’s suffers from migraine headaches. “President Aulas assured me that he would do everything to find the best specialists,” affirmed the Brazilian. “I was very touched by that. It was a determining factor in my decision to come here.”

On Sunday, he will be experience his first derby against AS Saint-Etienne at Gerland – a special match, as he could see during his first training session at Tola Vologe. Many supporter groups turned up at the session to encourage their side – and they seemed impressed with their new recruit. “I’m really happy that the fans came,” he declared. “Playing in a packed stadium of 44,000 people doesn’t bother me; I’ve played in stadiums with 100,000 people in the crowd.”
Facebook
Tweet
Forum