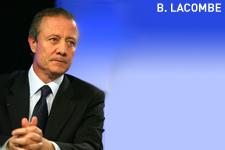 Among the names on the list of potential recruits into OL’s central defence lies that of Cleber Anderson, former Corinthians and Benfica player. Bernard Lacombe gives us a picture of the player…
Bernard can you tell us a bit about himbr /> “He’s big and he’s fast, possibly faster than Cris. He’s good in the air. He reminds me of Bayern’s Lucio or even of Edmilson. He doesn’t have Edmilson’s long passing out of defence, but he has other qualities. He’s right-footed, but he plays on the left, which is good for linking him up with, say, Squillaci. I’ve been following him for a while, having gone to see him play when we were replacing Edmilson. And then, in the Corinthians-Cruzeiro match, I saw Cris.”

Why didn’t he play much for Benfica last season?
“He had family problems, with his son, and it required his full attention. He was even looking at going back to Brazil because of it. If he came to Lyon, there would be no problems in terms of medical care.”

Would he be ready straight away?
“Yes. He’s ready. There would be no problem for him to play for us as soon as his papers come through.”
Facebook
Tweet
Forum