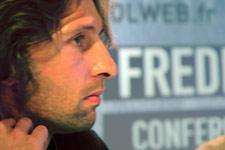 This afternoon a press conference took place on the set of OLTV to unveil Frédéric Roux.
“We’re all very happy to have signed Frédéric Roux,” declared Bernard Lacombe. “He will be our second goalkeeper after Rémy (Vercoutre). We expect that Fred (Roux) will help Rémy to be even better.”

The former stand-in for Ulrich Ramé at Bordeaux has been out of contract since annulling his agreement with Ajaccio has joined the 6-time French champions for 1 season. “We defined the profile of the keeper we were after,” said Alain Perrin. “We were looking for someone who has experience on and off the pitch, can speak French and who is capable of playing in the Champions League. Fred played in Europe for Bordeaux (3 UEFA Cup matches in season 2000-01). Fred’ll have to support Rémy as Rémy did Greg. This signing has no bearing on our opinion of Joan Hartock, of whom we think a great deal; we simply needed a 3rd keeper.”

Frédéric Roux say he feels “very honoured” to join the OL squad. “I had a really up and down off-season,” admits the man from Nancy. “I knew I took a risk in annulling my contract with Ajaccio… But I don’t regret it. I had some contact from overseas 2nd division clubs. For me, (OL) is the jackpot, a fantastic opportunity. I feel like I’m starting a new page here. At 34, I’m at a stage where I want to get stuck into it. I hope to bring Rémy Vercoutre my support and my experience.”

The new OL number 35 says he has been following OL’s start to the season very closely: “OL really gets people talking, whether they like the club or not. I’ve arrived in a less comfortable environment than I was in last season, but that doesn’t bother me at all. I know the guys will do everything they can to turn their start to the season around and get back on track.”