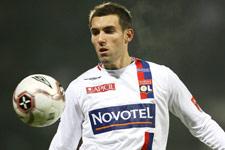 In the absence of Coupet… and Wiltord, Anthony Réveillère has become the squad’s most experience L1 campaigner. He is our tipster for round 4…
On the left or the right of the OL defence, “Antho” has had a strong start to the season despite a fractured hand. Tied to the club until 2011, the former Rennes player has just been called up to Raymond Domenech’s 35-man squad to take on Slovakia. He has 5 caps to date.

In L1, the native of Doué-la-Fontaine has played 256 matches and scored 3 goals since February 3 98 in Bastia, his first match at the highest level. This total makes him the most experienced L1 player in current the OL squad. In Toulouse, he took the throw in just before Cris was seriously injured. “I spoke about it with him afterwards. I took the throw in pretty fast. He couldn’t control the ball because it was a bit too far in front of him; he stretched to clear the ball and his leg crashed into the leg of Elmander who was rushing towards him. I’ve seen the pictures and it’s a weird injury. It’s sad for us and for him.” Is he bothered by constant niggling injuries? “That’s part of football. You can’t let it get you down; the season has just begun.”

Sp it’s off to Lorient this weekend. Any special memories? “Yes, when I was with Rennes we were knocked out of the quarter-finals of the Coupe de la Ligue in 2002, we lost 1-0. We didn’t play well, we thought we were already in the final. There was Feindouno, Darcheville… With OL, I was a replacement last year. I replaced Fred 10 minutes from the end. It went well (a 3-1 win). I hope we can do the same again, but Lorient is in a strong phase at the moment and are very confident. We’ll see though because they played mid-week in Paris.”

The start of the season always has a special flavour to it and an important bearing on the rest of the season. “It’s important to start well. You can really get the ball rolling and that can give you confidence for the rest of the season. It’s important for the teams who don’t have a lot of money or star players. On the other hand, if you don’t start well, doubt creeps in quickly and you start to dwell on it. It happened to me twice with Rennes. It’s tough to get through; it’s difficult psychologically. Before you know it you can be battling to avoid relegation. This season? It’s similar to others we’ve had. We know Nancy is in form. They play the ball very well.”

Anthony’s tips for round 4:

Sochaux – Monaco: “A 1-1 draw. They both need the points. I know Piquionne well from my time at Rennes. He’ll score… and Monsoreau will score an own goal for Sochaux.”

Auxerre – Caen: “It’s rough for Auxerre to be in the position they’re in after 3 rounds, but I think this round a win is within their reach. They’ll win this one.”

Metz – PSG: “Metz is a young side with a lot of potential but PSG needs to pull its finger out and get some points. I know a lot of guys from PSG who I know are winners.”

ASSE – Bordeaux: “It should be a good match. I think it’ll be a draw.”

Toulouse – Strasbourg: “This is my outside runner. I’m betting on a Strasbourg victory over Toulouse. I think the Toulousains used a lot of energy in the match against Liverpool.”

Lens – Valenciennes: “Draw. VA has in-form strikers who are strong on the counter.”

Nice – Rennes: “Rennes, obviously. It’s my old club, but I don’t really know anyone there except for Didot and Sorlin. A 1-0 win with a goal from Fanni, the former Lens man.”

OM – Nancy: “Marseille needs to win. They have started the season poorly and are coming off a defeat to VA. So I’ll choose OM, who’ll have their fans behind them for the match.”
Facebook
Tweet
Forum