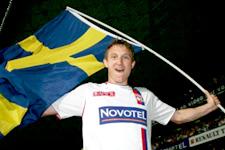 11 OL players were called up to play friendlies with their respective national teams. 5 were called up to the France squad and another 6 were chosen for other national teams. Fabio Grosso will know on Saturday.
Hatem Ben Arfa was called up by Réné Girard for the friendly between Italy and France, which will take place on Tuesday August 21 at the Alberto Picco stadium in La Spezia (21:00).

On August 22 in Geneva, Switzerland will take on the Netherlands in a friendly. Patrick Müller was named in Köbi Kuhn’s squad.

On August 22 at 17:30 in Montpellier, Algeria will take on Brazil. Nadir Belhadj was included in the 19-man Algerian squad.

On August 22 in Gothenburg, Sweden will take on the USA at 20:30. Kim Källström is in the Swedish squad.

With Milan Baros, the Czech Republic will travel to Austria to play a friendly on August 22.

On August 22 at the Charlety stadium in Paris, the Ivory Coast will face Egypt in a friendly match, counting among its number Kader Keita.

Fabio Grosso has to wait until Saturday August 18 to know whether he will be part of the Italy squad to face Hungary in Budapest on August 22.
Facebook
Tweet
Forum