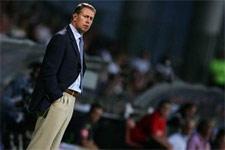 The news is still coming thick and fast from OL, so Alain Perrin’s fortnightly press conference was rich in questions and answers on various subjects…
Alain how was the week after Toulouse?
“Good. We worked calmly and are preparing well for our trip to Lorient. It was a full week, one of the last we’ll have for a while. We weren’t too upset by the loss in Toulouse. Nothing went right; it began the night before with the injury to Müller.”

A word on Cris’s absence and the captaincy?
“Cris is one of the best defenders in the world and he’s a leader. That counts for a lot. The captain’s armband? We won’t impose it on Juninho. He is such a part of the team that he won’t flee his responsibilities, captain or not. I spoke about it with him. It’s not the most important thing for me; the most important is the next match against Lorient.”

Lorient?
“They play a coherent game, you can see their manager’s stamp on their style. I like seeing teams like Lorient that display human and collective values on the pitch. The understanding among their players is still strong as there weren’t too many changes to the squad during the summer. Their attackers Saïfi and Vahirua are an unusual pairing that is very difficult to control. But they are of course backed up by an excellent defensive unit. Their win over PSG is typical of their beginning to the season.”

And OL?
“We have to take on their strengths, so in this case that means playing very well as a team. Even though we are having some tough times at the moment, we should be able to grit our teeth and get through it. We have to rely on our individual talent to cover what’s missing collectively. Müller won’t play. Sidney may not play either as our goal is to have him ready for the derby against St-Etienne. They are both on the way back. Ben Arfa? He will have some game time at Lorient. In Toulouse, it was out of my hands. Hatem should have had a chance to play but then all those problems struck.”

How are the various transfer deals coming along?
“We still need a keeper, a defender and an attacker. Don’t forget we’re into the countdown until the end of the transfer window. The keeper? We’re hoping to wrap this one up as quickly as possible. But it seems unlikely to me that any keeper we recruit would be there for the Lorient match. Fred? I don’t know where things stand. Wiltord? I saw him in the beginning of the week. He is still intent on leaving, and he won’t be in the squad for Lorient. The central defender? We’d prefer a left-footed player. We’re working on it.”
Facebook
Tweet
Forum