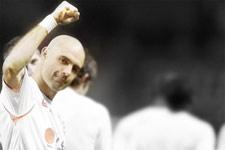 To tell the truth, it was strange. Seeing Cris on crutches is to say the least unusual. Having seen him delivering perfectly-timed tackles with such authority over his opponents or managing to leap higher than his man, one had almost forgotten that the Brazilian could scream or suffer.
“The pain was terrible,” he reveals. “I know myself, I know I’m a fighter, that it’s hard to injure me. Straight away I knew it was serious, that it was over.”
On Saturday, at Toulouse’s Stadium, the Policeman bowed his head for the first time. “It’s all new for me,” he tells. “I’ve never been this badly injured before.” On Monday afternoon, the much-feared verdict crushed the last hopes of seeing Cris on the field again in 2007. Despite his double rupture of the anterior cruciate and external medial ligaments that will keep him out of action for “at least 6 months,” the Brazilian remains positive: “It’s going well. I’m down and disappointed, but that’s life… You have to laugh, because 6 months is a long time to be out of the game, it’s tough. Now I have to have surgery as quickly as possible so I can begin my recovery. I’ll do all I can to come back as quickly as possible.”

The Brazilian has chosen to have his operation in Brazil on Friday. “I spoke to the President, the manager and doctor about it. Everything’s ready and I leave on Friday afternoon. It’s better for me to be in Brazil because there I can enjoy the support of my parents, my kids and my friends.”

There has definitely been something of a cloud over Lyon recently. After Fred, out with a fractured 5th metatarsal, and Grégory Coupet, suffering from an internal medial ligament rupture that will keep him out of the game for the next 4 months, Cris is the 3rd first-team regular to be sidelined for a lengthy period. “It’s a bit tough for the morale of my team-mates,” confides the Brazilian. “It’s a dark moment that you have to get past because the league is very tough and so is the Champions League, which is just around the corner. But they’re strong and I know they’ll have a good league campaign. The squad is tough and can rise above all of this.”

[IMG41224#R]Cris certainly has enough talent and experience to deal with this stroke of bad luck but it must be noted that it isn’t all that simple. The absence of the Brazilian, who had the most game time of any Olympien last season (3960 minutes in 44 matches) will definitely pose problems for manager Alain Perrin. Before finding a replacement in central defence, the OM manager will have to choose a successor as team captain. ON this point, Cris is categorical: “It (the captain’s armband) has to be given to Juni (Juninho). He’s the leader. I know he won’t accept but he needs to have it imposed on him even though I know it’s slightly tough for him”… and for the OL fans as well. Since his arrival in France in the summer of 2004, Cris has won hearts everywhere. 6 months without hearing Gerland chanting “Cris! Cris! Cris!” is a hell of a long time. And even though the long absence won’t dim the OL fans’ affections for Cris, it’s still very strange to find oneself in the summertime saying, “Bring on winter!”
Facebook
Tweet
Forum