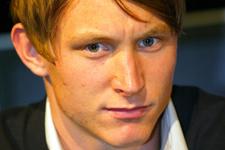 On Saturday in Toulouse, Kim Källström was sent off for the second time in his career. It was an anomaly for a player who last season received only on yellow card in L1 (round 1 versus Nantes).
In the 34th minute, match referee Olivier Thual sent off the Swede, guilty in his eyes of having spat in the direction of 4th referee Julian Grelot, in reaction to an unpunished elbow from Nicolas Dieuze. “I took an elbow in the jaw right in front of the referee,” says the Swede. “I was bleeding and I spat, but not at him (the 4th referee). Several metres from him. Still, it was a big mistake. I have no explanation really. It’s the first time that’s happened to me. But the worst thing is that I put my team-mates in a tough situation.”

Until that point, the Lyonnais had perfectly contained the Toulousains, conceding only one scoring chance in the first half hour. “We lost the match because of my red card,” he regrets. “This morning I apologised to my team-mates and the coaching staff. At the final whistle, I also went and apologised to the 4th referee. There is the human side and the footballing side. So, I apologised as a man. We shook hands, and there is no problem between us now. I think he understands that I didn’t do it on purpose.”

Källström will miss the next OL trip, to Lorient. Is he worried that Disciplinary Commission will lengthen his suspension? “The fact that I didn’t do it on purpose is an important element. I’m not a familiar face at the Disciplinary Commission. Last season, I had never been suspended. I will tell the truth.”

The OL midfielder used the press conference to put an end to rumours linking him with a move to FC Valencia in Spain. “Valencia is a big European club in a great league. It made sense to listen to the offer but I never said I wanted to leave. I will stay with OL.”
Facebook
Tweet
Forum