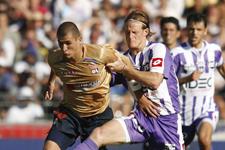 Johan Elmander once again proved to be the undoing of the Lyonnais. Last season he scored one goal and set up 2 others against OL, and on this occasion he crucified the French champions at the death (90’).
In this second round match of the L1 season, OL tasted defeat for the first time this season, and may have lost much more than the point for a draw, which for a long time looked secure despite their numerical disadvantage. After a clash with Elmander, Cris left the filed early. In the absence of Patrick Müller, who injured his knee on Friday and who was replaced in central defence by Mathieu Bodmer, Alain Perrin could well be forced to field a 3rd central defensive pairing in as many matches against Lorient in a week’s time.

At kick-off, the object of attention wasn’t the Swede Johan Elmander, who was announced as being doubtful for the match after taking a knock in the defeat to Valenciennes, but the formation that Alain Perrin had chosen. The OL manager had said in Thursday that he would “stick with the 4-4-2 formation that has worked well so far”. The incorporation of Juninho into the OL midfield, in place of Milan Baros, positioned the Lyonnais in a 4-3-3 that was “different from the 4-3-3 “á la lyonnaise” from last season, according to Assistant Manager Christophe Galtier.

The OL manager’s tactical choices worked well for the first 35 minutes, up until the expulsion of Kim Källström, guilty of dissent against the 4th referee after receiving an injury from the elbow of Nicolas Dieuze. Quite a blow for the Lyonnais, who had seen Sidney Govou leave the field minutes before with an injury to his left thigh (22’). .

The match had until that point seemed conclusive. In a hard-fought first half, the Lyonnais had controlled the game well, not allowing TFC a single scoring opportunity. Early on Bryan Bergougnoux shot powerfully but to the right of Rémy Vercoutre’s goal (2’).

The Lyonnais could have even opened the scoring but Karim Benzema fired over with a powerful shot (9’) then shook Douchez’s right-hand post after a series of step-overs (33’). Juninho fired in a trademark free kick from 30m, forcing Douchez to punch the ball clear (19’). After a one-two with Benzema, Kader Keita screwed his shot wide (24’).

The expulsion of the Swede forced the French champions to hunker down, noticeably changing the course of the match. Rather timid until that point, the Toulousains stepped up to the plate. Elmander fired wide (41’). Cetto’s header hit the bar before Grosso blocked a shot from Sissoko (53’). The former Nantes man couldn’t hit the target (53’) and then Vercoutre dived on Mathieu’s effort (55’). Gignac and Emana had no more success than their team-mates (66’ and 77’). Left alone near the penalty spot, Elmander blasted the ball over the bar (84’).
But the match wasn’t over! Making the most of a rebound from Vercoutre, the Swede slammed the ball home from point blank range (90’). And it could have been worse for the Lyonnais: in stoppage time, Achille Emana hit the post (92’).

The Lyonnais can legitimately feel disappointed. They could have left Toulouse with a completely different result had Kader Keita’s not hit the post (63’). They will head to Lorient on Saturday to get back on track and confirm their strong start to the game before misfortune struck.
Facebook
Tweet
Forum