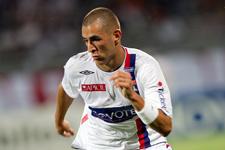 Olympique Lyonnais and Karim Benzema this week reached an agreement to extend the player’s contract for 2 supplementary years. The OL attacker is now linked to the club until June 30, 2012.

At only 19 years of age, Karim Benzema is starting his 4th season at OL, where he has played 41 L1 matches (7 goals) won 3 championship titles and 2 Trophées des Champions.

His performances with OL caught the eye of the France manager and he joined the national team last season. Given his first start on March 28, 2007, against Austria, Karim Benzema had a dream start, scoring the only goal of the victorious match.

The international striker has begun 2007-08 in fine form; he was chosen as player of the tournament in the Peace Cup (2 goals) and scored his first league goal against Auxerre last weekend at Gerland (2-0).

This season could bring him a 7th-straight French title with Olympique Lyonnais and a first participation in the finals phase of the Euros with the national team.

Concerning Kim Kallström, Jean-Michel Aulas, Marino Faccioli and the players’ agents have this week discusses a contract extension for the Swedish international Of 2 more years, or until June 30, 2012.

The 2 parties made progress in their talks and an agreement could be reached in the coming days.

Lastly, Olympique Lyonnais notes that its position on Sylvain Wiltord hasn’t changed despite what was written and said in the media on Friday.
Facebook
Tweet
Forum