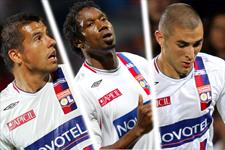 On Sunday August 6, Olympique Lyonnais beat Auxerre. From Karim Benzema’s goal to Milan Baros’ strike, passing by Keita’s mesmerising dribbling, a look back on the match… in photos.

GOVOU - BENZEMA: THE WINNING TICKET
Can Karim Benzema and Sidney Govou keep being so polite to each other? All of Gerland hopes so, anyway. This season, the OL number 14 has already racked up 2 assists for his team-mate, who returned the favour in the Trophée des Champions against Sochaux.
For the first match of the season, against Auxerre, the 2 Lyonnais virtually mimicked a goal they set up and scored against Shimizu in the Peace Cup. The only difference being that Karim Benzema scored with the right foot.
The build-up was exactly the same: Sidney Govou on the right of the area cuts inside before passing to Benzema, who controls the ball before unleashing a powerful drive into the opposition goal.
[IMG42419#C]
[IMG42420#C]

KADER KEITA’S RUNS
Sure, not everything was perfect in Kader Keita’s game. Against Auxerre, the former Lille man sometimes lacked a bit of clarity in the final pass but his dribbling and ephemeral way of moving set Gerland alight.
The OL players are master builders… of bridges. Against PSG au PSG, Sidney Govou invented the “nutmeg-round the man” move. Against Auxerre, in the 11th minute, it was Kader Keita’s turn to innovate, rounding Kahlenberg, Pedretti and Thomas with a “nutmeg-turn-nutmeg After an elastic move to get past Martin and several stunning stepovers, the Ivory Coast man received a standing ovation when subbed off, the fans all converts to his formidable dribbling style.

MILAN BAROS SPRINGS THE OFF-SIDE TRAP
For some time the modern attacker has been little more than a fox loitering in the area, waiting for a goal to poach. Faced with defences that are constantly getting faster and better, he has to be able to operate at the limit of off-side and time his runs in behind the defence to perfection.
Against Auxerre, at the very moment when the ball left Jérémy Toulalan’s foot, Milan Baros was keeping himself on exactly the same line as his marker, Marcos. On the right of the defence, Martin was also covering the OL striker.
After controlling the ball with his right foot, the Czech smoothly lifted the ball over the onrushing keeper to score his first goal of the season.
“I’m really happy for him because he wasn’t happy with his preparation,” declared Alain Perrin. “This goal is the pay-off for his hard work and self-sacrifice.” After having 2 perfectly valid goals disallowed in the Peace Cup and the Trophée des Champions, just like OL, the Czech striker has got his season off to a great start.