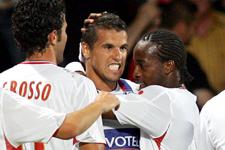 OL won its first home game of the season, something the Lyonnais hadn’t done since 1982. Thanks to the first goals in official competition for OL’s strikers Baros and Benzema, the Lyonnais had an ideal start to season 2007-08.
OL didn’t take the lead on the league table (Valenciennes scored more goals) but they did take care of business; in beating Auxerre 2-0, they can congratulate themselves on an excellent beginning before taking on Toulouse on Saturday.

On Thursday, the shock was too brutal and the concern too great. When just one man is missing… But OL didn’t go to water. At kick off, Grégory Coupet’s shadow glided over Gerland. “We’re all with you Greg,” read the banner in the North stand in support of the OL keeper who injured his knee. On the pitch, Rémy Vercoutre took heart. Rather timid, the Auxerrois didn’t really give the stand-in keeper a chance to shine, but at any rate he responded perfectly to the rare assaults organised by Jean Fernandez’s men. “When you’re a keeper at OL, you know you won’t touch too many balls but you have to step up when the time comes,” he affirmed after the match.
First of all he turned Benoit Pedretti’s dangerous free kick out for a corner (12’) before easily stopping Marcos’ header (28’). Then in stoppage time he won out in a one-on-one with Maoulida (90’).

Toulalan and co nonetheless took their time to get the measure of the Auxerrois. In the pre-season OL has suffered somewhat from a lack of sharpness in front of goal that has made their job far more difficult than it should have been. Against Auxerre, the Lyonnais had to wait until the 33rd minute to open the scoring, which was mainly the fault of Olivier Sorin, the Auxerre keeper, who cut out Karim Benzema’s cross (2’), saved at the feet of Kim Källström (9’) and punched out for a corner a powerful shot from Jérémy Toulalan, denying the former Nantes player the second goal of his L1 career (31’).
The Lyonnais could have killed the game off had they been sharper in front of goal; Baros (8’), Govou from a Kader Keita cross that had got past Benzema and Cris (14’) then with a reverse scissor kick (27’), Karim Benzema with a skidding shot (15’) and Kim Källström after a some tricky work from Keita couldn’t find the target (43’).
By half time, the Lyonnais had taken twice as many shots as their visitors (10 to 5). One of those 10 shots was from Milan Baros who, released by a long pass from Jérémy Toulalan, lifted the ball delicately over Sorin to give his side a well-deserved lead (33’). It was the Czech striker’s first goal of the season following a pre-season in which he worked hard for the team.

The other main point that emerged on the night was that Kader Keita is capable of setting Gerland on fire with his mesmerising dribbling and deceptive movement. On several occasions the man from the Ivory Coast ran rings around Jaurès and Martin, the Auxerre flank players. In one of his runs through the middle, he got the ball to Kim Källström 20m out from goal, but the Swede’s shot was easily swallowed up by Sorin (47’). From a Grosso cross, there were only centimetres between Baros and his second goal of the evening (54’).

The Lyonnais were controlled the end of the match, leaving no space for Maoulida and co. The North stand had only just finished cheering on Juninho, who was warming up behind Sorin’s goal, when Karim Benzema pounced. With a cannoning left-foot shot, the young centre-forward blasted the ball into the right-hand side of the Auxerre keeper’s goal (70’).

Gerland got to its feet to cheer Milan Baros when he was taken off to make way for the entry of Juninho. With his first free kick, from 35m out, the Brazilian forced Sorin to punch the ball out for a corner (76’). Soon after he had another free kick, from 20m, and couldn’t find the target, but by that stage the match was over as a contest anyway (85’).

The French champions will be on the road for the next 2 rounds before hosting St-Etienne at Gerland in round 4. In any case, their season has had the best of starts.
Facebook
Tweet
Forum