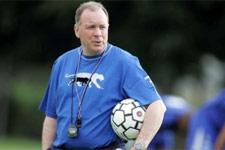 Guy Roux definitively left his AJA, as did many major players in the past few seasons. After an indifferent season 2006-07, the club hasn’t made any sensational signings… but hasn’t descended into pessimism either.
If you believe the L1 players and managers, whose vote was published today in L’Equipe AJA should finish the season in 9th place… taking into consideration that 4 Auxerrois voted for their club. The new version of the team seems to have lost some quality in relation to its predecessor. Akalé (9 goals and 5 assists), Kaboul, Sagna, Benoit Cheyrou, Mathis, Radet and Cool… all left for other clubs or ended their careers. Maoulida, Tamas, Marco Antonio, Chafni, Lesage and Rémy Riou arrived. At first glance it may seem that the team has taken a turn for the worse, but if you take into account the hazards of the round ball and a manager of Jean Fernandez’s quality, the ‘facts’ are far from definitive. Their record in pre-season friendlies is balanced: 3 wins and 3 losses, the last one 2-0 against Wolfsburg. Their other opponents were Liverpool, UNFP, Châteauroux, Troyes and Bröndby.

“You can’t be pessimistic. I trust in the squad and the new players to beat the drop and, as Guy Roux said, why not be ambitious and aim for a European ticket?” This is what Jean Fernandez had to say in France Football in June 29. AJA will probably field a 4-2-3-1 with new recruit Maoulida up front, aided on the wings by Jelen (10 goals last season) on the right and Lesage or Lejeune on the left. Pedretti, Thomas and Kahlenberg will man the midfield. In defence, they will have Sorin in goals with former Lyonnais Riou as his understudy, along with, Mignot and Jaurès. They still have to find successors to Sagna and Kaboul, and they have Marco Antonio, Martin and Tamas to choose from… Chafni and Tamas will miss Sunday night’s match.

Head to head? Since season 1999-2000 and AJA’s 2-0 win at the Abbé Deschamps stadium, Auxerre has lost 10, at home as well as at Gerland, and drawn 4, 3 of which were at Gerland. Not to mention 2 losses in the Trophée des Champions! OL is most definitely AJA’s b�te noire. The men from the Yonne’s last win at Gerland dates back to season 1995-96.

One last note: AJA is the last French club to have pulled off a league and cup double, in 1995-96. Since then the club has had one top-3 finish (3rd in 2001-02) and has only twice finished lower than 10th (13th in 2000-2001 and 14th); it has twice lifted the Coupe de France in two attempts (in 2003 against PSG and in 2005 against Sedan). All they need now is the Coupe de la Ligue to have a complete collection, which is the ambition of Jean Fernandez…
Facebook
Tweet
Forum