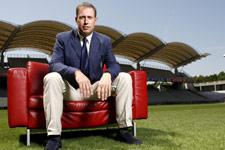 Alain Perrin covered several areas in his press conference: Coupet’s injury, Auxerre, transfers and the formation…
Alain, what’s your reaction to Coupet’s injury?
“You think about the player and what’s in store for him. Rémy will be our number 1 keeper, he has replaced Grégory before and done an excellent job. One man’s pain is another’s chance. I’m happy with his work. Necessarily we are now thinking about recruiting a 3rd keeper. After that there is time for everything. We’ll figure out what we need and then look at which keepers are available… the squad hasn’t been affected; the lads have confidence in Rémy’s capabilities. Itandje? His name has come up. It depends what he wants to do and whether he can integrate into the squad well… but there’s no rush to find another keeper.”

A word on the other injuries?
“I’m happy to have Belhadj and Squillaci back… but injuries are part of football. Grosso, Belhadj and Juninho are coming back into contention. We’ll see about putting Juninho in the side for Sunday.”

Against Auxerre is the season really under way?
“Yes. We still have a bit of room to move before we reach 100% but we are definitely ready for Auxerre. There is room for improvement without losing. But at the end of August we won’t be far off.”

Auxerre?
“We’ve been watching them, and they could give us some trouble on Sunday night; Jean Fernandez knows how to prepare his teams. AJA is strong defensively, and dangerous on the counter, with Jelen, Maoulida and Lesage. It’s up to us not to be caught by surprise.”

Will your starting XI be different from that against Sochaux?
“There are players in strong form who weren’t there against Sochaux. It’s a question of competition in each position. We’ll see.”

A word on the potential transfers in progress?
“I think we need to bring in another striker. We want to have 2 top players per position and the attacking positions are the most demanding. Sure, Keita and Govou can cover up front when we need them. But there is a quantitative problem. It won’t be Reyes. Kanoute? He interests us but the figures involved are high. Also, I think the market will get moving between now and the end of August at the big clubs. Wiltord? It seems to me he is on his way out.”

A word on the formation?
“The team is receptive. But the most important thing is the quality of the players. I can see us using other formations as well. Balance is the key word. You also have to pay attention to each player’s effort and man management in general, especially when we play many matches in a row.”
Facebook
Tweet
Forum