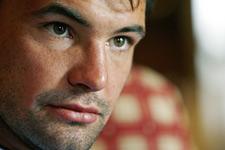 While all the round-ball observers in France analyse and discuss the changes at OL, which under Alain Perrin has switched from “4-3-3 à la lyonnaise” to 4-4-2, Jérémy Toulalan is staying calm.
“The formation isn’t important,” he says. “Its success depends on what you put into it. In our pre-season matches, we changed the formation but it didn’t make a huge difference: we’re still winning”.

And the pre-season stats back him up. In 5 friendly matches, 4 of which were in the Peace Cup, and the Trophée des Champions, OL has already racked up some impressive stats (5 wins and 1 loss). “The team is stronger than it was last season because we have already won two trophies,” says the former Nantes man while keeping in mind that, “as in recent seasons, our main goal is the title and to go as far as possible in the cups. We’ll take the matches as they come.”

The change of formation will probably change his working area and role. “I’ll have to push up a bit further and be a bit further away from the defence. But I’m used to it from my time at Nantes and for the national team. When we’re getting back to defend, everyone has to make the effort, the strikers, the attacking midfielders. It’s a balance you have to find. We’re just beginning with this formation, so necessarily there is some fine tuning to do.” And some long-term changes to make: “We need to be more consistent and more competitive so we don’t have the kind of form slump we went through last season.”

It should be noted that OL’s competitors have strengthened their ranks in the off-season. “It won’t be easy this year” he notes. “Marseille did some intelligent recruiting but you never know what will happen. Even if they have strong individuals, it’s the team that makes the difference.”
One thing is for sure: like for the last 6 seasons, OL will once again be the team to beat. “It’ll have to come to an end one day. We always have some pressure on us but wanting to stay on top is strong motivation. I’d rather be where we are than where they are…”

With Euro 2008 in his sights, season 2007-08 is taking on a particular importance. “Euro 2008 is a huge goal. To be chosen for the France team I have to be playing well for my club. For me it’s a year of consolidation. It’s always tough to do but I have the cards in my hand.”
Facebook
Tweet
Forum