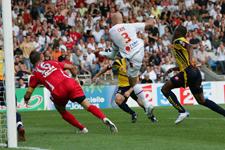 On Saturday July 28, Olympique Lyonnais won its 6th Trophée des Champions. From Milan Baros’ valid but invalidated goal through Karim Benzema’s assist to Cris’s decisive strike, a look back on the match in images, with a vague sensation of déja-vu…
BENZEMA WITH THE ASSIST
Olympique Lyonnais’ start to the season is more than encouraging: 5 wins and just 1 loss. And it’s impossible to dissociate Karim Benzema from this excellent beginning. The young OL striker scored twice in the Peace Cup, a tournament in which he was awarded the Golden Ball.
But OL’s new number 10 has also proven to be a remarkable passer of the ball, capable of pulling the right move at the right moment, like his precise long pass with the outside of his boot, between Pichot and Elbounadi, for Sidney Govou, who expertly sprung the off-side trap against Sochaux.
“The 4-4-2 system offers him a lot more freedom”, observed former OL centre-forward Florian Maurice. “That way Karim will be able to get away from his man more, and move into space”. Which is exactly what Karim was up to at the Peace Cup, unleashing a long – and unsighted – pass for Hatem Ben Arfa for a superb one-two.
His immense talent, perfect vision, complicity with his team-mates and breath-taking pace did the rest. [IMG42360#C]
BAD LUCK MILAN!
The look is incredulous. Matches are beginning to run on and turn into each other. Less than 3 weeks after being denied a valid goal against Lille, Milan Baros can’t believe his eyes: just like against the Nordistes, the ball once again crossed the line only to bounce out again, and once again the referee missed it!
The scenario is identical: the ball hits the cross-bar and bounces down behind the goal line. The Czech striker surely believed he had opened his scoring account for the year.
After Keita’s header hitting the post against Bolton, that makes 3 times the Lyonnais have hit the woodwork this pre-season.
[IMG42362#C]
CRIS CAPTAIN AND SCORER
“First match, first goal, first win and first trophy as captain”. At the final whistle, Cris, wearing the captain’s armband for the first time at Gerland, had trouble hiding his emotions. “All I had to do was put it in the back of the net,” he says almost by way of an excuse. On a Kader Keita corner, Karim Benzema flew high and got his head to the ball first. Despite the impressive reflexes of Teddy Richert, at point blank range, Cris swooped to crucify the Doubiste keeper and give his men a definitive advantage in first-half stoppage time.
The goal in fact resembled the one scored by Cris’ compatriot and team-mate Fred last season, on April 28 2007, in round 34 of L1. Juninho’s corner fell to Malouda. Yohann Pelé made an astonishing save but the ball fell to the Brazilian striker who was left with a simple tap-in. So it seems that at OL, one Brazilian goal scorer can hide another…
[IMG42361#C]