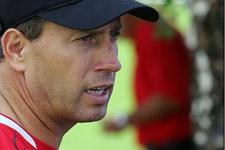 Alain Perrin answered questions from the numerous media figures present after training on Thursday morning. A manager happy to be getting the season officially under way…
Alain, how is the OL squad 48 hours out from this match?
“The squad is in fine form, motivated and receptive. They are in a good frame of mind even though they aren’t 100% yet. We’re still in preparation mode. Everyone is really happy to be getting the competitive matches under way. The Trophée des Champions is an official match while the Peace Cup was a friendly tournament. We really want to start our competitive season well and the team is in a good place. I’m getting good vibes despite some absences.”

A word on your Gerland debut against your former team
“I know Gerland, I’ve been here several times. It’s true, I’d like to start well against my old club. It’s also a chance to see some familiar faces. The Sochaux side has made some big changes. We’ve been watching them, and we’re preparing for them like it’s a league match.”

Is there extra pressure on you because OL has always won this trophy?
“No, not especially. Each match has its own truth.”

OL has also undergone a lot of changes…
“Yes, but the skeleton is still there. Is OL at the end of a cycle? It’s up to the players, both old and new, to show that OL is still on top. We know people will be waiting for us. We know we’ll be the favourites.”