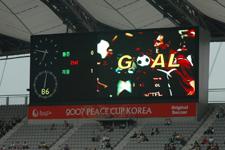 Cris
“I did some exercise with Robert. It’s going well; there’s no problem on the ball. We’ll see what happens next week…”

Belhadj
“It’s great to win a first trophy. I started every match, which wasn’t a foregone conclusion, but which made sense. I gave my all and it went well. We’ve had a good pre-season and some matches that were of a higher standard than the regular pre-season friendlies.”

[IMG42325#L]Ben Arfa
“My best move? I had to try it, I had to take a risk. At first I was looking to shoot but then I changed my mind. I’m not at my maximum yet, not where I want to and can get to. There’s a place up for grabs, but there is no pressure, it’s all a pleasure really. And anyway, it’s the manager who decides. If another left-sided player arrives, it’ll just increase my motivation. You learn from competing for your place and we will be playing in several competitions next season. Mentally I’m getting better year by year. I’m aware of a lot of things now.”.

Coupet
“It was a good win. We did the job. Thankfully football isn’t just physical. We played some good football, which is good, although there are grounds to be slightly worried. We were in a tournament; we had to come back with the trophy.”

Perrin
“We’ve felt our organisation getting better as we rack the games up. We worked hard on this trip and got a deserved victory. It was a good tournament. Everything is going to go very quickly now. We have to think about the Trophée des Champions as well as working hard and helping the injured players recover. Those who were missing will have to catch up. We had some strong opposition but it wasn’t an official competition. Bolton played a very English game and we had to be careful. We knew we could win despite the fatigue and we pulled off several set pieces we worked on in training. Toulalan did a huge job in the middle of the park and was helped well by the wide players. Another positive aspect? We created a lot of chances – sooner or later you’ll put them away. 4-4-2? I prefer to think in terms of principles than tactics, it means you can adapt to different opposition and situations. In European football, the big teams can adapt. It’s a new squad; we need new benchmarks, new leaders.”

[IMG42326#R]Källström
“It was important for this new squad to win and to come home with a new trophy. I have no problem with 4-4-2, I’ve played it since I was very young. All the teams play that way in Sweden.”

Jean-Michel Aulas
“The win is reassuring. Bravo for the mental strength and tenacity, we got what we deserved. Hats off to Alain Perrin for the victory. Tonight’s match was fantastic. The new recruits? We’ll see. We’re working with Rémy and Bernard. We’re talking with Alain. Bernard is in Brazil. I hope Fred will be in Lyon when training goes back on Tuesday afternoon. Wiltord. We’ve reached an agreement with Rennes. Now Sylvain has to do the same.”
Facebook
Tweet
Forum