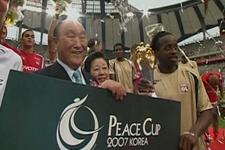 Third time lucky! After being runners-up in 2 Peace Cup finals, the Lyonnais finally won the tournament, beating Bolton 1 goal to 0.
The win was a long time coming. Dominant for 90 minutes, the Lyonnais had to wait until the end of the match to get the better of a solid but uninspired English team whose main threat, Nicolas Anelka, was perfectly marshalled by the OL defence. Unlike in their second match of the competition, against Reading, the Olympiens managed to contain the rare Bolton openings but made things difficult for themselves by not putting away their numerous chances earlier in the game.

The Olympiens started the match well and didn’t seem to be suffering as a result of having 48 hours less recovery time than the Englishmen. Alain Perrin’s men were in fine form for their 3rd Peace Cup final in 3 participations and their second in a row against an English club*. Despite the physical handicap , Alain Perrin decided to field a side almost identical to the one that dominated River Plate, with the exceptions of Keita and Réveillère, kept on the sidelines due to the arm protection they were wearing, replacing Ben Arfa and Baros.

Once again the OL manager decided to use the 4-4-2 system that the Lyonnais seem to have mastered, with Keita alongside Benzema in attack and Belhadj supporting Ben Arfa on the left flank.
In this formation, the Olympiens wasted no time in getting the ball wide to the wings and creating their 2 best chances of the first half. After Bodmer’s header from a Benzema free kick, which was easily caught by Jaaskelainen (7’), the young France international burst through the English defence on the right wing, crossing for Keita, whose header crashed into the post (8’). After a stunning dribbling run along the goal line, the Ivorian put the ball on Karim Benzema’s head, but the young striker couldn’t find the target (42’). At the break, the Lyonnais were ruing their poor finishing as well as the vigilance of the Finnish keeper who had stopped long-range shots from Belhadj (18’), Benzema (31’) and Källström (37’), as well as winning his one-on-one against Sidney Govou (20’).

At the front of the Bolton attack, Nicolas Anelka seemed to be all alone and had to wait for the second half to start before he had a chance to force Grégory Coupet to make his first save of the match (53’). The Englishmen toughened up and Vaz Té fired powerfully from a wide position, forcing Coupet to take 2 bites to secure the ball (68’). But the English revival was short-lived – in fact that was it for the rest of the game for Gary Speed and co.

Despite their inability to go forward, Sammy Lee’s men were still in a position to inflict a 3rd consecutive Peace Cup final defeat on the Olympiens. The French champions should have killed the game off much earlier on but their finishing was profligate, typified by the 2 one-on-ones in which Jaaskelainen got the better of Ben Arfa and then Baros (73’). Released on a long ball, the Czech shot straight at the Finnish keeper (79’) and shortly afterwards Kim Källström fired a free kick high into the Seoul sky (83’).

In the end the difference was made through a piece of individual brilliance. On a mazing run from deep, Hatem Ben Arfa beat 3 English defenders before cutting the ball back for Kim Källström, whose powerful shot went right through Jaaskelainen’s defences.

Thanks to this victory, the Lyonnais receive $2m and have begun their season in the best possible way. Sure, it wasn’t all perfect but the important things are in place: the OL squad has added another title to its trophy cabinet and learned many valuable lessons ahead of the beginning of the French league season.