Benzema awarded the Golden Ball at the Peace Cup 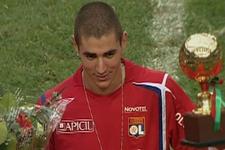 Karim Benzema was quite rightly chosen as the best player of the 2007 edition of the Peace Cup. The Lyonnais received the award thanks to a record of 2 goals and an assist.
Impressive in his ball skills and cool head, he was followed in the voting by Bolton’s Finnish keeper Jaaskelainen, who received the Silver Ball, and Nicolas Anelka, recipient of the Bronze Ball.

The final between Bolton and OL finished such that Nicolas Anelka, Kevin Nolan and Karim Benzema didn’t have a chance to share title of tournament top-scorer. On the other hand, Kim Källström made the most of his chances and ended equal top on the scorers charts with 2 goals.