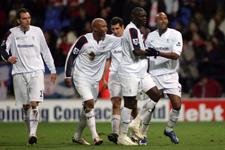 On Saturday at 10:00 (17:00 Seoul time), OL will take on Bolton in the final of the Peace Cup 2007 (live on OLTV and OLWEB PREMIUM). Here’s a look at the “Wanderers”, who count among their number France striker Nicolas Anelka.
Bolton is a town in the north of England, situated within Greater Manchester, with a population of 140,000. It’s the most important town in England not to have the status of ‘city’ (a term designating large cities that are dense, dynamic, prestigious and historic). Bolton is the twin town of Le Mans.


Founded in 1874 as “Christ Church FC” by the students of the Christ Church Sunday School. Without a ground of their own, they were nicknamed the Wanderers, a name still used at the moment. Their other nickname is: The Trotters.
Bolton has never been champions of England but has won the FA Cup four times (1923, 1926, 1929 and 1958).

One former OL youth player has played in Bolton’s colours: Bruno N’Gotti. Youri Djorkaeff, a native of Lyon, also played for the Wanderers, spending two seasons at the Reebok Stadium.


[IMG42321#L]Other players to have worn the Bolton jersey include: former PSG player Jay-Jay Okocha (between 2002 and 2006), Bernard Mendy, Les Ferdinand, Japanese idol Hidetoshi Nakata , Khalilou Fadiga, who won the 2003 Coupe de France with AJ Auxerre, Jared Borgetti, who set the Confederations Cup alight with his formidable aerial game, and Nat Lofthouse. This last name is that of the current President and Director of Bolton. He remains the club’s all-time leading scorer with 255 goals in 452 matches (between 1946 and 1960). In the England shirt, he scored 30 goals in 33 appearances. He is one of only three players in Bolton’s history to have top-scored in the Premier League (along with Willie Moir in 1949 and Frank Worthington in 1979).

Bolton has a 30-man squad including only 10 Englishmen (none of whom play for their country), 2 Senegalese, 2 Frenchmen (Gérard Cid and Nicolas Anelka), 2 Slovaks, 1 Spaniard, 1 Israeli, 1 German, 1 Trinidadian, 1 Pole,1 Portuguese, 1 Omani, 1 Finn, 1 Ivorian, 1 Jamaican, 1 Greek, 1 Irishman, 1 Welshman and 1 Iranian.
In the Bolton squad, the Lyonnais will face 5 players who have played n the French league.
Nicolas Anelka is unquestionably the star of the team.
Gérard Cid, who arrived at Bolton this summer, went to the Bordeaux Youth Academy and then played at Istres.
Abdoulaye Faye played at OM before also playing for Istres.
Abdoulaye Meïté debuted at Red Star 93 then played for Marseille for 6 seasons.
El Hadji Diouf played for Sochaux, Rennes and Lens.

[IMG42322#R]The Bolton squad is a mix of youth and experience.
Having arrived in the 2002 off season, former Real Madrid captain Ivan Campo, 33 years old and Champions League winner in 2002, is a first-team regular in central defence.
Stelios Giannakopoulos, 32 years old, European champion with Greece in 2004 in Portugal, transferred to Bolton in the 2003 off-season.
Gary Speed, 37 years old and former pillar of the Newcastle team, is the team’s elder statesman. Last season he started every league match and scored 8 goals (5 from the penalty spot).

After narrowly avoiding the drop in seasons 2001-02 and 2002-03 (16th and 17th places respectively), Bolton has established itself in the top half of the table, notably over the last two seasons (8th in 2003-04 and 6th in 2004-05).
Last season, the men from the Reebok Stadium finished in 7th place on the table, 33 points behind champions Manchester United, along the way beating Liverpool (2-0) and Arsenal (3-1) at home.
Last season’s top scorer was Nicolas Anelka with 11 strikes, 9 behind Didier Drogba.
On Saturday, the Lyonnais will meet a team that is willing and able. Kevin Davies (pictured) distinguished himself last season – with 88 fouls, he was the most-sanctioned player in the English league and received the second-highest number of cards, with 10 yellows and red.
Last season, Bolton manager Sammy Lee used 26 players, the second-smallest total after Reading (25 players).