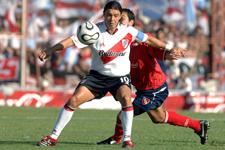 Founded in 1901, Club Atlético River Plate (the letters CARP are interlaced in the logo) is a sacred institution in Argentine football. Their stadium is the El Monumental de Buenos Aires. El Monumental was opened on May 25 1938 with a match between River Plate and the Uruguayans of Penarol (3-1). The records reflect that 100,000 watched the match, while capacity now is 76,609 spectators.

In reference to the sums spent to gather the best players in Argentina in the 30s and 70s, the River Plate players are known as Los Millonarios.

6 players have played for their national team at least once. Tuzzio (1 cap), Bellushi (1), Ponzio (6), Rosales (7) and Ortega (86) have all worn the famous sky blue and white uniform. Falco Garcia has played once for Colombia.
In the current River squad, only one player has ever played in the French league: defender Eduardo Tuzzio, who played 22 matches for Olympique de Marseille between 2001 and 2003.
Another River player well-known to European audiences: midfielder Ariel Ortega (El Burrito), who has played for Valencia, Sampdoria and Genoa as well as Parma.

In 2006/2007, River Plate finished in 3rd place in the Apertura, beating arch-rivals Boca Junior 2-1 in round 10.
In the Clausura, which they finished in 4th place (with the best defence in the competition), Daniel Passarella’s men drew (1-1) at the Bombonera (Boca Juniors’ stadium). With 5 goals, Ernesto Antonio Farías was their top scorer, 6 lengths behind prolific goleador Martin Palermo of Boca Juniors. This summer, the Argentine international left River to join Mexican club Deportivo Toluca.

[IMG42312#R]After the first 2 rounds of the Peace Cup 2007, River Plate tops group B with 2 wins. Two 1-0 wins thanks to goals from Matías Abelairas, 23 years old, who plays at medio volante (holding midfielder). He played in the reserves last season.
Eduardo Tuzzio was on the other hand sent off in the second match, against Japanese club Shimizu.


* The Argentine professional football league was created in 1931. In 1996, it was cut in 2, the Metropolitan and the Nacional. Reunified between 1985 and 1990, it has since 1991 taken place in 2 phases, home and away, meaning there are 2 champions every season. Only River Plate has achieved the feat of winning both phases in one season (in 1997 with Marcelo Salas, awarded South American Footballer of the Year 1997, at centre-forward).