OL in the Peace Cup final 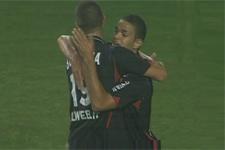 Thanks to its 3-1 win (goals from Benzema, Ben Arfa and Källström), OL qualified for the Peace Cup final for the 3rd time in as many occasions. On Saturday July 21, at 10:00 (French time, live on OLTV and OLWEB.fr), the Olympiens will take on Bolton.
Alain Perrin was this morning, on the pages of sports daily L’Equipe, talking up the competitive spirit that surrounds matches in the Peace Cup. The OL manager certainly wasn’t disappointed by the resistance offered by the Argentines of River Plate, nor by the drive and determination his own players displayed. It’s in exactly this kind of performance that the collective force and group spirit, indispensable in great seasons, are forged.

In a hotly contested match played in 98% humidity, the Gones managed to alternate periods of domination and little slumps to win out, and in style, too, reaching the Peace Cup final for the 3rd consecutive time.
The players’ high spirits certainly won’t be Alain Perrin’s only source of satisfaction when reviewing the match. Importantly, the 4-4-2 system he has been using seems to suit his troops perfectly, offering them a solid defensive backdrop and at the same time a powerful attacking verve typified by the easy effectiveness of Karim Benzema. At just 19 years of age, he confirms match after match that he could well be OL’s main attacking threat this season.

The injuries to Cris and Toto Squillaci forced Alain Perrin to improvise, putting Matthieu Bodmer in the centre of defence, the position where the OL number 5 played at the beginning of his career. The OL manager also had to work around the fact that the referee, M. Lee, refused to let Anthony Réveillère and Kader Keita take the field because of the arm protectors they were wearing.
After the 4-3-3 used against Reading, Perrin chose to go with the 4-4-2 that saw the Olympiens beat Japanese club Shimizu 2-0. Jérémy Toulalan and Kim Källström played in the centre, Hatem Ben Arfa and Sidney Govou the wings, while Milan Baros and Karim Benzema fronted up the attack. From the start of the match, the Olympiens seemed much more at ease than during their match against Reading. Karim Benzema took only 5 minutes to open the scoring. On a centre from Milan Baros, he made the most of a mistake from former OM player Tuzzio to open the scoring with a left-footed drive (5’). During a first half dominated technically and collectively by OL, the young France international put the Argentine defence to the knife. With a spectacular long pass, executed while looking the other way, he found Hatem Ben Arfa, who made no mistake in scoring OL’s second. Already having scored against Shimizu, Benzema had a chance to widen the gap but saw his shot blocked (26’). After rounding the Argentine keeper, he fired narrowly wide from the tightest of angles (33’). Govou was off target (6’ and 30’) and Ben Arfa’s shot was blocked (27’).

At half time, the Olympiens were perhaps still within an effective but uninspired River Plate’s reach. In their first chance of the match, Ferrari centred for Ruben, who equalised with a volley (14’).
Near half time, Grégory Coupet pulled of an exceptional save to keep out Almeiras’ free kick (40’). The international keeper also proved decisive in the second half, maintaining his side’s lead with authority, saving in the 62nd and 75th minutes before expertly smothering Almeiras’ shot. The Argentines managed to steal possession and keep it for several long minutes. Belluschi’s powerful shot was blocked by Bodmer (65’). Fernandez couldn’t hit the target (66’) before being sent off for a dangerous tackle on Belhadj (80’). Etchemaite then took his turn to blast a shot straight at Grégory Coupet (85’).

And so the storm passed. The end of the game allowed Loïc Rémy and Anthony Mounier to show a little of their explosive qualities. After a shot from Kim Källström went straight to the keeper (70’), the young leftie dragged his shot wide (80’) and then his next shot was weak (86’). Karim Benzema did the same, strong on effort but poor on results (80’ and 82’). After a foul on Loïc Rémy, Kim Källström put his team in the clear from the penalty spot (90’).

Over and above the fact of having reached the final again, which will assure OL of a 4th match in this competition, Alain Perrin can be proud of producing an OL side that fights hard, wins out and gives its all until the end, which is no mean feat! The Lyonnais have already done as well as in 2003 and 2005, when they also reached the final. Now the lads just need to conclude their pre-season preparations in the best possible way in the final against Bolton (Saturday July 21, 10:00 France time). From what they showed against River Plate, the OL of 2007-08 seems to have everything it needs for a triumphant return from Asia.
Videos
Facebook
Tweet
Forum
Videos