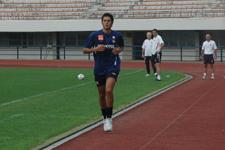 Except for Cris, still under treatment, all the Lyonnais took part in training on the pitch at Seongham Stadium. It seems the starting XI for River Plate is already taking shape…
After breakfast, part of the squad took part in an autograph signing session in the Marriott commercial centre. And it was a great success, with almost 1,000 people showing up for autographs or even just a glimpse of the players. Many of the fans came with OL merchandise…


At 17:00, the players began a physical conditioning session with Robert Duverne. Fabio Grosso went at his own rhythm before hitting the running track for some 1km runs. The Italian hasn’t resumed ball work but is already running very powerfully. His team-mates moved from conditioning to ball work before spending the rest of the session playing practice matches.

They started with 10 on 10, without the keepers, who were working with Joël Bats. One team will start on Thursday and the other will be the reserves. The starting XI (likely): Coupet – Clerc, Bodmer, Müller, Réveillère – Govou, Toulalan, Källström, Ben Arfa – Keita, Benzema. Former Lille man Mathieu Bodmer will play in the centre of defence. “It doesn’t bother me to play there. It’s where I began my career, where I made my name. At Lille, I helped out in that area.” Alain Perrin is sticking with his 4-4-2.

After the 10 on 10, it was time for 7 on 7, with keepers this time, followed by a penalty shootout session and then the customary stretching. At 18:50, everyone hit the locker room hoping the traffic would be light on the way back to the hotel. But once again, traffic was crawling. On Thursday, OL has a match to win. There will be no training in the morning before the match, unlike the match days against Shimizu and Reading. Friday night, the OL squad will attend the Novotel at the invitation of the Franco-Korean Chamber of Commerce, along with 300 other special guests…