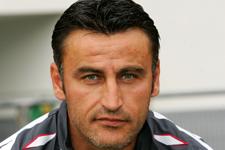 Marseillais Christophe Galtier is day by day getting to know his new environment. He has been involved in football for many years and discusses this Korean sojourn… and the match against River Plate…
U-21 European Champion with France in 1988 as part of the generation that included Cantona, Sauzée, Paille, Roche, Silvestre, Angloma… 291 L1 matches; 7 clubs in a playing career that began in 85-86 and ended in 98-99. He played for OM of course, Lille, Toulouse, Angers, Nïmes for 4 months and then OM again before a season at Monza and a last hurrah with Liaoming in China. “I have some superb memories of my time in China. I played former Lyon man Fabrice Grange. We were inseparable.” He is a very open person and full of joy, but he admits one fault from the outset: “I’ve been smoking too much since I stopped playing. We used to be allowed to smoke on the bench. When I look back and see myself next to Clemente or Braga, 2 smokers on the OM bench, I just think, ‘what a loser’. A piece of advice: don’t even start.”

Christophe was a journeyman. Did he play against any current Lyonnais? “When I started out I came up against Bernard Lacombe; a real handful; an intelligent player. I think I played against Sylvain Wiltord when he was at Rennes and/or Bordeaux. And I played against Greg with OM when he was laying for Les Verts. It was a cup game and we won.”

13 seasons as a professional, 9 in the top flight. He scored just one goal: “for Anders against OM at the Stade Vélodrome: a penalty.” He had barely hung up his boots as a player when he returned to the bench as an assistant coach with Casoni, Clemente, Braga at OM; then with Richard Tardy at Aris Salonique; then Gérard Gili at Bastia, where he worked with Essien and Alou Diarra. In 2004 he began working with Alain Perrin at Al Ain before Portsmouth, Sochaux and OL. “I had promised to stay with Gérard Gili when he found a club after Bastia. It took him some time. Alain Perrin, who was my tenant in Marseille, proposed going with him to Al Ain. The adventure began…”

So Christophe has been in his current position for 3 weeks. What are his first impressions? “Positive, for sure. Alain and I already knew the OL players. We’re figuring out how best to work together as a group, a group that has changed considerably since last season, which is no small matter. There are definitely a lot of quality players and the squad works hard. There have been a few injuries that have stopped us from working as we would have liked. Preparation time is always tricky, especially when you think that there could still be some changes in the squad.”

Victorious against Lille in Albertville, then in its first match in South Korea, OL went down to Reading. “We’re right in the middle of our preparations; we’re rotating the squad; we’re trying out a new formation and we have injuries… that can leave you fielding some bizarre teams. Sure, it’s always disappointing to lose. But against the Englishmen, it was played out on the slightest details. We had many more chances than they did. Cris had to leave the match and it was the first match for some players, like Keita; there is also the fatigue from the long journey.”

There is one group match left… and it’s a must-win in order to get to final. “Even though we always play to win, we’ve approached these first 3 matches as practice games. But against River Plate, it’s game on. Believe me, everything will be done with this in mind. And we’ll see how this side is at bouncing back after defeat.” Then, it’s the final, we hope, then the return to Lyon for the league season. Christophe hasn’t had much time to himself. “I get to the stadium early in the morning and I leave late. When I’m not working, I ride with mates in Marseille and I run 3 times a week. But when I work, there’s no time for anything else.”
Facebook
Tweet
Forum