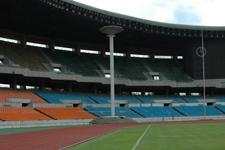 After a long debriefing, part of the squad stayed at the hotel to train and the rest went to Seoul’s Olympic Stadium… On this public holiday, the traffic finally eased off…
The departure for training was pushed back.The reason? A long debriefing after the match against Reading. At 11:00, part of the OL squad visited Seoul’s Olympic Stadium, a place full of history, but also somewhat dated; the pitch isn’t up the standard OL is used to. There was an invasion of dragonflies and a middling heat. 13 players were there, including Sylvain Wiltord.

For an hour and a half, the squad did some varied ball work . The presence of “Nino” couldn’t have gone unnoticed, so much does the player invest himself in everything he does. He is undeniably a leader. An unusual person, but what a player! In the games organised by Alain Perrin, Bruno Génésio made an excellent 14th man, pulling off a superb volley, the move of the day! Coupet, Hartock, Ben Arfa, Benzema, Wiltord, Govou, Mounier, Paillot, Clerc, Diarra, Toulalan, Baros and Rémy worked up a decent sweat. At 12:40, they headed back to the hotel for a well-deserved lunch before an afternoon left to their own devices.

[IMG42293#L][IMG42294#R]8 players stayed at the hotel to work with Robert Duverne and 2 physios: Fabio Santos, Vercoutre, Belhadj, Müller, Réveillère, Källström, Bodmer and Keita. Work in the rooms and in the pool. Fabio Grosso was still nursing his lumbago. As for Cris, he has a problem with his right thigh and is waiting to have an MRI. “He might have a small strain. We’re getting the examination done soon.” The “Doc” Jean-Jacques Amprino has been busy since the beginning of the trip.

The afternoon off is a chance to sample the various smells, both fragrant and off-putting, as well as the diverse colours and sounds. Just near the Novotel you can plunge yourself into another world of small stalls selling everything imaginable. And it’s also a workout: Seoul is very far from being a flat city!