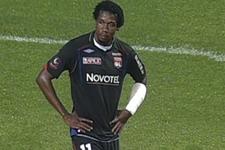 The Lyonnais haven’t been knocked out of the Peace Cup, but their chances of qualifying have taken a knock after their 1-0 defeat to Reading. To reach the final they will absolutely have to win on Thursday against River Plate.
To have a hope of reaching the final, the Lyonnais will have to beat the Argentines of River Plate on Thursday, while at the same time keeping an eye on the match between the other 2 teams from group B*. So nothing is finished yet, but there is no doubt that the Olympiens have made things really difficult for themselves. Against a workmanlike English outfit, typified by the indefatigable Hunt, Alain Perrin’s men shone rarely and never looked like finding an equaliser after Cox opened the scoring.

Sure the OL squad is still in its preparatory phase tactically and physically; sure, the players are coming to grips with the new players in the squad; and the OL manager will take some precious lessons from this defeat, lessons on his initial formation. After using a 4 – 4 – 2 in the first match, Perrin decided to test the 4 – 3 – 3 “à la Lyonnaise”. After 57 minutes, the entry of Govou for Mathieu Bodmer, changed the trend of the match. Momentarily losing focus as they reorganised themselves, OL fell victim to the opportunism of the English, who opened the scoring (62’).

Steve Coppell’s men can now turn their heads towards a place in the final despite threatening OL only on rare occasions. The first chance came when Anthony Réveillère fouled Kevin Doyle, but Rémy Vercoutre saved the Irishman’s shot from the penalty spot (6’). The first half ended more easily for the new-look OL central defensive line-up comprising Cris, who was substituted by Sandy Paillot after feeling some pain in his thigh, and Patrick Müller. Cox fired high (22’) and then wide (46’) and Doyle followed suit (23’).
But, in this early stage of the season, OL isn’t yet a well-oiled machine, which it needs to be in order to trouble well-drilled team. Anthony Mounier and Kader Keita celebrated their first start at OL. In the first half the Ivorian Keita was OL most threatening attacking option. But he was off target twice (3’ and 27’) and lost his one-on-one with Stack (14’). Nadir Belhadj’s shot hit the post (5’), Kim Källström did little better (27’ and 45’) and Kader Keita also missed several times (20’, 40’ and 43’).

At the very beginning of the second half, Baros found the keeper’s gloves (46’). OL didn’t display much attacking impetus after going behind and didn’t look like finding an equaliser. Kim Källström (69’) shot wide and then Belhadj forced the keeper to fist the ball away (70’). At the end of stoppage time, Ben Arfa and Benzema came very close to snatching a draw (93’). But without success.

The Lyonnais will have to, on Thursday, rely on their mental resources and get past the lack of inspiration and unfamiliarity with each other. A task well within their capabilities, and from this point, qualifying can only be that much sweeter!

*The sides equal on points will be separated on goal difference.