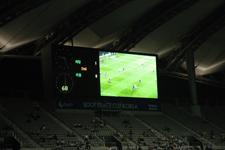 The Lyonnais didn’t manage to trouble Reading, as side that proved much more effective. Check out the match stats… and the reactions…
OL again largely dominated in terms of shots taken: 23 to 9. 8 shots on target, 9 off target and 5 blocked. 14 from outside the area and 8 from inside. Källström 5, Mounier 4, Keita 4, Benzema 3, Belhadj 2, Baros 1, Müller 1, Rémy 1, Ben Arfa 1. 5 scoring chances for Cris and co.

The Englishmen took 9 shots: 3 on target, 6 off target; 4 from inside the area and 5 from outside. One penalty saved.

Rémy Vercoutre made 7 significant stops, many in the air, and 1 decisive one (penalty).

Rémy Vercoutre: “Penalties? We work on them all year around with Jo. I just had to pick the right direction. The Englishmen were much more effective than we were, playing a very English style, opportunist and effective. I’m happy to have played; it was the plan.”

Jean-Michel Aulas: “Disappointed? Yes and no. You have to get past it and keep the preparations on track. We have to win on Thursday against the Argentines in order to qualify. If we lose, I’ll be disappointed. The were good and bad points tonight. I haven’t spoken with Sylvain Wiltord.”

Alain Perrin: “I always play to win. It was a good match from a physical point of view. In this type of match the first goal is always very important. After they scored, it got really tough despite some fresh legs coming on. Our players are at different stages of readiness. Mathieu Bodmer, for example, was suffering from cramps. Reading kept us pinned down in our area. We had some good passages but also had a hard time getting into the game. The Englishmen went in very hard, and it’s part of the attraction of the tournament that one encounters teams of many different styles. The goal is to get to the final, but to beat River Plate, we’ll need some endurance. So I’ll pick my side after training on Wednesday.”

Patrick Müller: “We came up against an aggressive side that challenges hard, which gave us a real workout. Reading stopped us from playing our game and we found it hard to maintain possession. We were a bit tired, but we still want to win every game play. We have to beat River Plate, which will be tough, and a different kind of team all over again. The new players? We have to communicate well. And we’re doing that.”