Presenting… the Englishmen of Reading 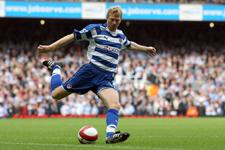 In its first season in the top flight, Reading finished 2006-07 in 8th place, the only promoted team to stay up.
They secured 52 points from 38 matches, ending up with the 6th-best attacking record in the Premier League. They didn’t beat any of the top 4 teams (Manchester United, Chelsea, Arsenal and Liverpool).
With 13 goals in 32 matches, Irishman Kevin Doyle is their main attacking threat. He was 7th on the scorers chart last season.

Despite qualifying for the Intertoto Cup, Reading declined to take part in the UEFA Cup qualifying competition.

Reading was knocked out of the FA in the last 16 by Man U and in the 3rd round of the League Cup by Liverpool.
In the pre-season, Reading recruited 3 foreigners, the Australian Oliver Bozanic from Central Coast Mariners FC, Dane Mikkel Andersen from AB Copenhagen and Irishman Alan Bennett from Cork City as well as Englishmen Greg Halford from Colchester and Michael Duberry from Stoke City.
Reading has in its ranks 13 Englishmen, 4 Irishmen, 2 Australians, 2 Americans, 2 Icelanders, 2 Nigerians, 1 Cameroonians, 1 Welshman, 1 Ecuadorian, 1 Senegalese, 1 Korean, 1 Scot and 1 Frenchman, Kalifa Cissé, 25-yo, who trained at Toulouse. Another former L1 player is the Senegalese Ibrahima Sonko, who trained at Grenoble.
English internationals Kerry Dixon, Les Ferdinand, Martin Keown and Matthew Upson as well as Irishman Ray Houghton have previously worn Reading’s blue and white.
Facebook
Tweet
Forum