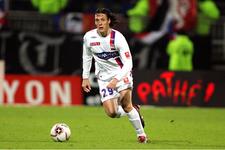 Sébastien Squillaci left his team-mates to return to France. The squad had the morning off before training in the afternoon…
The Lyonnais had the morning off. Breakfast was at 9:45. Then lunch, a siesta and a 16:00 departure for afternoon training. Cris spent part of his morning being interviewed by Christian Lanier (Le Progrès). Just beforehand, he told us that he often speaks to Tiago on the phone, saying that for him, Tiago is “an exceptional player and an exceptional man.”

For the unlucky Sébastien Squillaci, the Korean adventure is over for the injured defender, who caught the plane for Lyon today. Limping on crutches, he looked demoralised. “This injury is really annoying. It’s been ages since I was last injured. I’m in a lot of pain and have to go home to get treatment.” Card sharps Govou, Redissi and Vercoutre will have to find a new 4th.