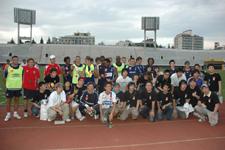 July 15: the OL midfielder’s 26th birthday. “I’m thinking of all my loved ones and friends. I hope it’ll be a good year for me.” Alou once again showed a solid, even temperament during training.

Fabio Grosso stayed at the hotel and had treatment from physio Patrick Perret, suffering from lumbago. He is not certain for the match against Reading. Jérémy Toulalan, still suffering from an injury to his left thigh, jogged and then worked with Robert Duverne. Milan Baros took part in training but didn’t play the training match at the end, receiving a massage instead. Back in Lyon, Juninho left to receive treatment in Brazil.

The France international flew out of France on Sunday. He will arrive in Seoul at 07:00 and should take part in the day’s training sessions.

After a warm-up, the Olympiens took shots on goal in 2 groups, giving Coupet and Vercoutre a solid workout. Then Alain Perrin got things moving with a match full of rhythm and energy… with some nice moves from Benzema and Ben Arfa as well as Keita and Fabio Santos. They finished up with some stretching. Several players complained about the hardness of the pitch underfoot despite its being hosed down before the session.

Numerous Korean press identities attended OL’s training session, a testament to the curiosity about the club in this country. “In Korea, the English league is the most popular but people also know about OL, which we consider a big club. Juninho is a star in Korea and we’re very disappointed he was injured, he would have been the star of the Peace Cup. Many people here thought OL would win the Champions League in 2006-07,” enthused Sang Cheol Lee, Sports 2.0 journalist.

Around 30 young Koreans weer at the training session. Strong OL fans, they offered the players presents before asking for photos and autographs from their idols.

The OL manager gave a quick press conference. “Grosso is uncertain for the Reading game. Wiltord is arriving and that’s good. We’ll try to register him in stead of Squillaci, which will give us a chance to do some work with him. We’ll treat him like any other player; I have no problem with him and if he stays, I think he will be useful. He always has a good attitude on the pitch, he’s a leader and an intelligent player. We’ll just have to see how he settles into the squad. If he stays, he will give his all. He is marginal in terms of his lifestyle, but he is a big part of the squad.” As for the match against Reading, the former Sochaux boss knows what’s waiting for him. “We saw them pay River Plate. They’re a bit underdone, but they’re tough and typically English. I was planning on starting the 11 players who didn’t start against Shimizu and share the game time around. I’m not sure know how I’ll deal with our problems.”

At the end of training, Sidney Govou and Rémy Vercoutre talked with President Jean-Michel Aulas about the size of the tournament bonuses. “They also asked me about the bonus for winning the tournament…”. The President, who took part in a convention on the Peace Cup, invite the French press to dinner.