The Lyonnais are in Seoul 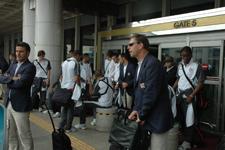 The day after their win over Shimizu, OL caught a plane for Seoul. They spent their Saturday resting before training in the late afternoon…
At 10:00 the Lyonnais caught their 50-minute flight for Seoul. Cris and co were greeted by dazzling sunshine in the capital where, if all goes well, they will be staying for a week. “I slept well and I didn’t dream about my goal.” Youngster Anthony Mounier seems fresh and ready to go, unfatigued after the match against Shimizu. Sébastien Squillaci didn’t have a chance to have an MRI. He’ll know more in the next day or so about the pain that has been causing him to limp.

Airport formalities take their toll on the squad. Guy Genet says smiling: “European trips are a walk in the park compared to what you have to do for 10 days in Korea… when we get back to Lyon, it’ll feel like the season is already over.”

17:30 on Saturday July 14. A working day in Korea! After a siesta, return to work. The Lyonnais trained at Seongham Stadium after a terribly long bus trip. Squillaci stayed at the hotel after having an MRI. Toulalan was limited to walking after taking a knock on his left thigh. For the rest of the squad, warm-ups with and without the ball. Then a long tactical session on defensive positioning and re-positioning. Alain Perrin explained in detail what he was after and repeatedly corrected his troops. To finish, a match without Govou, Coupet, Benzema, Belhadj, Müller and Clerc who instead stretched with Robert Duverne. Baros got a foot massage.

2 hours of training at a comfortable temperature, a change from 2 years ago. The lads return to the hotel at 19:30. There will be no ball work on Sunday morning, just a single session in the afternoon.