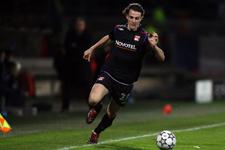 The former Monaco man’s tournament is over, having injured is foot at the end of the win over Shimizu. The Peace Cup leaves its mark on the OL squad: after Govou in 2005 and Abidal in 2005, Toto has been sidelined. “He has a fascial lesion. But we have to wait for the next MRI (in 8 days) to really determine the extent of the damage. He is in pain and has to avoid walking. He will return to Lyon as soon as possible.”

After taking the day’s training session, the OL manager spoke about his defender’s injury. “Sure, it’s a setback. First Fred, then Juninho and now Seb. It has to stop. We have Alou Diarra and Mathieu Bodmer who can fill in if we need them to, and it would be interesting to see Fabio Grosso in that spot… we’ll see what we can do with him. He will play 45 minutes on Monday.” On the long travel times the team has been experiencing, the former Sochaux coach makes himself very clear: “We won’t whinge about it. The bus trips are long, but we’re sitting down. It could be worse…”

Karim’s excellent match didn’t go unnoticed. Sports daily “Sports World” referred to him as the next Thierry Henry. As for OL’s performance in general, the paper gave this summation: OL got the job done.

The President wasn’t at training, having been invited along with Olivier Blanc to the French Embassy for July 14 celebrations.

The match against Reading

The squad will be rotated. Vercoutre will probably be in goals and Grosso and Kader Keita should make their OL debuts…
Facebook
Tweet
Forum