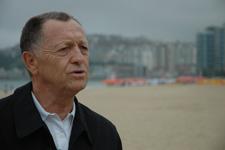 The Lyonnais had 23 shots on goal… Quote of the day? President Jean-Michel Aulas: “We’re not empty-handed and we’ll see what happens”
2-0 was the final score and the statistics clearly demonstrate OL’s domination of Japanese club Shimizu:

11 Shimizu shots: 3 on target, 6 off target and 2 shots blocked. 7 from inside the area and 4 from outside. % scoring chances.

Grégory Coupet made 10 significant saves and 1 decisive save, from a free kick in the first half.

Hatem Ben Arfa: “With my chance to score, I was at the end of a long run. I should have stopped. I’m ambitious this season, I really want to play in this team. But I’m not pressuring myself. I’ve beefed up… I feel stronger in challenges now. I want to stabilise at 75kg, which is heavier than my average of 72 last season.”

Karim Benzema: “Of all my chances to score, I really thought I would put the last one away. I ended up scoring on one of the tougher chances…”

Nadir Belhadj: “I have to work on my defensive positioning. Playing in another position? Sure, but that’s the manager’s decision…”

Anthony Mounier: “I won’t stop now that I’ve scored. I just need to keep stepping up when I’m given a chance to play. My goal? I didn’t second-guess myself. I prefer playing on the left…”

Jean-Michel Aulas: “We’re not empty-handed and we’ll see what happens.”

Alain Perrin: “We tried playing a 4-4-2 and we’ll keep testing it. There were some good points but some not-so-good ones as well. The fact that I brought Mounier, Rémy and Paillot to Korea means that these 3 youngsters will be part of the squad this season. They are staying at OL. Ben Arfa? We’ll see him on the left flank again… along with Källström and Belhadj, whose games are slightly different from his.”

Christophe Galtier: “There’s a lot of talent in this team… Reading? I’ve seen our next opponents play before, they’re very physical…”