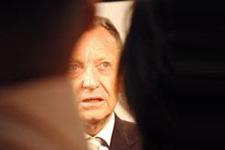 President Jean-Michel Aulas is in South Korea. He attended the morning training session and afterwards had a few words to say, notably on the importance of participating in the Peace Cup…
President, is it still important for OL to participate in the Peace Cup ?
“Yes. It’s important to have a good preparation in a country that is organised very professionally; a country with remarkable infrastructure and remarkable sporting facilities. The Peace Cup offers us everything we need for a strong preparation as well as the chance to play against high-quality opposition. And it enhances OL’s reputation in Asia, an impressive continent, notably in the economic sector. Asian countries are strong on investment and making things happen.”

Your presence?
“I think it’s important for me to be here with the squad. A new adventure is beginning and it’s good to be in the mix from the beginning. Personally, it’s not always easy to spend this much time away. There are sacrifices to be made and that shows the squad what I’m prepared to do for them. There have been a few changes since the end of last season, and this way I can accurately gauge how things are going first hand, and address important issues early.”

What do you expect from this competition?
“There are new players and a new manager. It’s a chance to get to know each other while preparing for the season ahead. Also, we’ve made it to the final twice and we’d love to go one better. But there are some very good teams here and we’re not yet fully prepared and still a bit jetlagged. So I won’t be letting the medias put pressure on Alain and the players. We’re not counting our chickens. But a win in the final would be a great start to the new season.”

A word on your new manager? On the squad?
“Alain has my full confidence. He brings his desire to win, his dynamism, his freshness, his youth to a very high-calibre squad. He has come a long way, just like I did. His enthusiasm and imagination is a breath of fresh air for the squad. The squad ? I’m happy with it. It’s balanced. We replaced some positions; there are some new talents at the club now. I find this squad is more solid physically than last season’s. They’re not completely prepared yet, but it stacks up well in relation to past squads.”

Where are things with Sylvain Wiltord?
“Sylvain, we brought him here from Arsenal. I’m not forgetting what he has brought us over the last 3 seasons. I’m disappointed with how things are going at the moment… it’s pretty ambiguous… I hope it’s resolved soon. Either Sylvain joins us on Saturday or we find a good solution for everyone.”
Facebook
Tweet
Forum