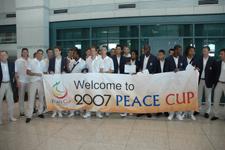 Slightly behind schedule, the Lyonnais have arrived in Busan. They had to change their plans slightly, notably the arranged training session. They kick off their tournament on Friday against Shimizu…
A slight delay on the Frankfurt-Seoul leg of their journey and an age spent waiting for their bags at Incheon Airport set the carefully planned OL schedule behind. Running more than an hour late, Coupet and co, in their new summer suits, were welcomed by some perseverant Korean fans, and Fabio Grosso was welcomed with some very complimentary banners.

But there was no time to cool their heels, it was straight to the city’s other airport… but the flight headed for the country’s biggest port couldn’t wait, even for the six-time French champions. The next flight couldn’t catch them up on the hour they had lost, and the traffic in Busan had them moving at a snail’s pace. Training was put back from 18:00 to 20:00 and changed to a simple jogging session along the Sea of Japan, just near the Grand Hôtel, where OL – and the Argentines of River Plate - will be staying.

The Olympiens had light 30 minute jog followed by stretching. “It’s not worth launching into a full session. On Friday morning, we’ll train at the stadium where we’ll play later that night. It’s very important…” Christophe Galtier and Alain Perrin, who joined the players on the run, won’t be dishing out any special treatment because of the long trip and the jetlag. There were plenty of worn-out faces among the players after the run. “All I want to do is eat something and go to bed.” Former Nantes player Jérémy Toulalan is exhausted; like Baros, Cris and several others. “It’s tough to deal with this kind of fatigue, because everyone reacts to it differently,” said “Doc” Jean-Jacques Amprino, showing some concern. “They’re going to play in just a few hours, you know…”

So now it’s time to recover in a relaxed atmosphere. The squad that flew to South Korea is a mix of experienced players, new faces and youngsters just promoted to the professional squad. President Jean-Michel Aulas would love to have OL’s name engraved on the trophy already won by PSV and Tottenham. And what better debut could there be for the new management pairing of Perrin and Galtier? “Even though it’s not our main goal, OL always wants to win. So winning the trophy would be very interesting.”