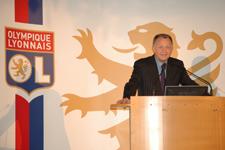 Accompanied by Bernard Lacombe and Alain Perrin, Jean-Michel Aulas presented OL’s new recruit, Fabio Grosso.
“It’s an important moment,” rejoiced the OL President, “a new stage in the progression of the club. For OL, it’s a big event. To bring a champion of the world and of Italy to the club is a source of great pride. It happened rather quickly but it was very complicated. Fabio Grosso was being followed by a dozen clubs. I thank him for his kindness, his openness and his professionalism”.


The Italian left back is the fourth new recruit for OL, after Nadir Belhadj, Kader Keita and Mathieu Bodmer. “We have an ambitious recruitment policy,” Aulas said. “Over the last 10 years, we’ve spent €290m on recruitment, €160m of which has been spent in the last 5 years. Not many European clubs can do that.”

The €7.5m spent to sign the Italian international brings the sum spent by OL in the off-season to “just over €40m”. “With the players we now have at our disposal, we have the means,” declared the Olympien President, noting that Kader Keita and Karim Benzema can play on the left and cover the departure of Florent Malouda. “The left flank of this version of OL has nothing to envy in its predecessors.”

Concerning other arrivals, Jean-Michel Aulas revealed that “there are no further reinforcements planned at the moment,” taking care to note that “that doesn’t mean that our recruiting is over. We have done what the manager asked us to but the possibility of a making a few more adjustments, should we need to, remains…”