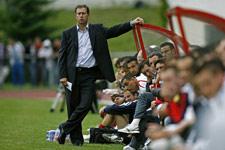 The OL manager and President Aulas give their reactions after OL’s 3-1 win in a friendly match against Lille.
Alain Perrin

A very satisfying evening?
Yes, because after a week of very heavy work at high altitude, it’s hard to know where the squad is at. Two halves, two teams, we lacked sharpness in the first half after we went behind. Just the same, we saw some interesting things out there.

We saw some fine passages of play, including a goal unjustly ruled out for OL. Was it a fair scoreline?
Yes, but that means nothing in terms of the preparation time of both teams. We had an insight into hat we’re capable of, and we saw some promising things. We’ve laid some strong foundations for the season ahead.

Tonight you used OL’s habitual 4-3-3 system – does it suit your style?
I’ve been familiar with it for a long time. It showed some interesting possibilities. We’ll have to see as we go, with the players, how we can tailor and adjust it.

What are your thoughts on the new recruits and the youngsters?
We saw some youngsters who have adjusted well to the team, who know the club. They displayed some real individual quality. The new players, Belhadj and Bodmer, were very promising, which augurs well for the club.

So, the next objective is the Peace Cup?
Yes, in 5 days we have a match to play in Korea, under very different conditions. Tonight the players only played 45 minutes each, whereas some will play 90 in Korea. It’ll be even tougher over there.

Your feelings after this match?
We saw a very good match. I’m impressed because our team just got back from some very fundamental conditioning work, and it’s tough to get back to competitive play after that kind of work. Lille were very aggressive and hard to control. We showed quality and with 3 goals, we’re getting off on the right foot. It’s always great to win your first match and I’m very satisfied.

Is it rare to see OL so good in its first preparatory match of the season?
You can feel that the players want to keep their status as the best team in France, and that made for a quality match. We could have scored many more goals and congratulations are due to the manager Robert Duverne for the excellent preparations.

Alain Perrin was very close to his players during the match and indeed the training camp. Is he a special manager?
Yes. I’ve wanted to have Alain here for 5 years. It didn’t happen at the time because Marseille beat us to him. I think he has grown since then and comes to Lyon at the right time.

Tomorrow you have a busy day with the unveiling of the new kits and the presentation of Fabio Grosso…
Indeed. It’s a bit like Sonny several years ago. It’s the arrival of an exceptional player, a reigning world champion and first-team regular for Italy. He is also reigning champion of Italy, with an Inter team that, like Lyon, transcended the league last season. Being a starter at Inter, that’s really something impressive. For us it’s a great victory; we worked really hard, it was complicated and risky, but I think he will bring Lyon what we may have been missing. We have an authentic World Cup winner at our club now and I hope will give everyone ideas about winning not only the league but possibly the Champions League that we so ardently want to win in the future.

On the other hand, Florent Malouda is slipping further away from Olympique Lyonnais…
Yes, I just spoke to Chelsea. They are set to send me an email agreeing to all our conditions, so it’s really good news. I thank Peter Kenyon for accepting the deal, I know it wasn’t easy to accede to our demands. He has just agreed to our proposition with the cash payment of the sum we were after so it’s really good for the club. It��s also great for Flo. I just spoke to him on the phone and he will set off for a medical at Chelsea straight away and then join the squad in the USA.

A word on Sylvain Wiltord, who wasn’t present tonight?
Sylvain wasn’t there because Alain Perrin gave him the chance to return. We had 22 players and made 2 teams. Sylvain is still in the squad because for the moment there is no news. I had a call from Rennes asking what our conditions were to let him go and we responded in due course. Now it’s up to Rennes and Sylvain Wiltord to come to an understanding but for the moment he is with OL and will go to Korea with the squad. I will also go to Korea in order to be close to the team throughout its preparations.

Is OL’s recruitment over for the year?
o, it’s never over. But I think we’ve done the most important part, replacing the positions we wanted to replace. We have Fabio Santos and Nadir Belhadj, who had a remarkable first half just now. We also brought in Mathieu Bodmer and Kader Keita, who isn’t yet ready to play due to injury, and now we have secured a reigning world champion in Fabio Grosso. We saw tonight that the team is already a formidable machine, but we’ll try to improve it if the manager wants to. It might not be necessary, considering the quality we saw on the pitch tonight. We have a lot of youngsters; we saw Hatem full of desire to take the place in the team that has been offered to him, and behind him we have Nadir Belhadj and Kim Källström, a whole list of players who can play in that position, so at the moment we’ll wait and see. We’ll know more on Fred’s situation soon, when we get x-rays we’ll have a better picture of what’s going on. Rémi Garde is looking at players in the U-20 league and we have a few ideas but for the moment we’ll probably leave it there because we believe the squad is already very competitive.