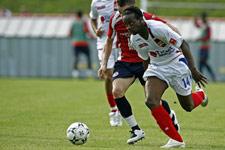 After a big week of preparation in Tignes, Olympique Lyonnais version 2007-08 returned to the pitch in the best possible way, beating Lille 3 goals to 1.
It was at the Stade Olympique Henry Dujol d’Albertville that Alain Perrin had his first chance to see his squad in action. The first big news of the evening was that the new OL manager had chosen to keep using the 4-3-3 system that has brought the club so much success in recent years. So, at kick-off, referee Mr. Biencentre was officiating over the following OL line-up: Coupet - Beynié, Müller, Squillaci, Belhadj – Fabio Santos, Bodmer, Juninho – Govou, Baros, Ben Arfa. No huge surprises except for the start given to the young Romain Beynié at right back, a first for him. In a precautionary measure, Kader Keita, who is recovering from a shoulder injury, was rested by the OL staff.

The beginning of the match was rather timid on both sides and the few free kicks whipped into the box by the maestro Juninho yielded no real danger. The first chance in fact wasn’t until the 9th minute, when Dumont drew a fine save from Greg Coupet. OL struck back almost instantly through Milan Baros who, put through by a lovely long pass from Sidney Govou, fired narrowly wide (12’). The tone was set. From the bench, Alain Perrin barked orders to his players, and it seemed set to pay off when, after some great work from Nadir Belhadj, Milan Baros shot on the turn from the edge of the area (27’). The Czech’s shot smashed into the underside of the bar and cannoned down, crossing the line and then bouncing back out, but the ref missed it… But it wasn’t going to stop there. Two minutes later (29’), it was Hatem Ben Arfa at the end of a fine passage of play from OL started by Sidney Govou and passing through Juninho. Unfortunately the young Olympien’s shot smashed into the outside of the bar.

[IMG42240#R]Against all expectations, it was Claude Puel’s men who opened the scoring, against the run of play. On a Bastos free kick from distance, Fauvergue soared and steered the ball past a helpless Greg Coupet (31’). Lille 1-0 up! Under the incessant encouragements of the Perrin-Galtier duo, the Olympiens looked to strike back straight away, first through Juninho, whose shot hit the bar (40’), and then through Sidney Govou, who saw his shot, deflected by Malicki, hit the post (43’). In the end, it was Matthieu Bodmer who, brought down in the penalty area, obtained a penalty. Juninho made no mistake and brought OL back on even terms (44’), and so the 22 players went in the break neck and neck.

With a week of such hard work under their belts, it was no surprise that it was a very different OL line-up that emerged after the break: Vercoutre – Clerc, Cris, Paillot, Réveillère – Diarra, Toulalan, Källström – Rémy, Benzema, Mounier. Alain Perrin opted for a brand-new attacking line with an average age of only 19. For Lille, Claude Puel made 6 substitutions. With rain beginning to fall, the second half got off to a slower start and the chances were fewer and far between. Only a solo run from Karim Benzema gave the LOSC keeper a chance to shine (74’). Bizarrely, managers can come and go, but certain qualities remain at OL – towards the end of the match, as happened many times last season, Alou Diarra and co struck to clinch the match.

In the first instance, Anthony Mounier received a magnificent ball from Anthony Réveillère on the left flank. The youngster, in his first professional season, burst past the defence and slid the ball back for Kim Källström, who slotted home (81’). OL 2, Lille 1! Straight afterwards, a corner was poorly cleared by the Lille rearguard and an unmarked Loïc Rémy struck with a brilliant looping header that hit the post before going into the Lille goal (85’).

So, mission accomplished for OL, who won their first match of the season, and in a very encouraging way. Also, the Lyonnais are set to fly out for the Peace Cup Korea on Wednesday and need to begin finding their match fitness. The signs are good…
Facebook
Tweet
Forum