A world champion at OL 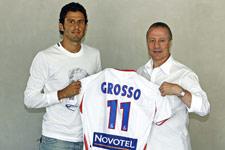 Inter Milan’s left back Fabio Grosso is about to join the Olympique Lyonnais squad. He will be the second world champion in OL’s history, after Edmilson.
Arriving in Lyon on Friday evening, the Italian international defender passed a medical this morning. He will return to Italy in the afternoon then come back to Lyon on Monday for a press conference and the launch of the new season, after which he will be presented to the press. The champions of France and Italy reached an agreement and Fabio Grosso will join the OL squad as of Monday.

Aged 29, Grosso joined Inter Milan last year after the World Cup. He had been playing for Palermo. IN the World Cup last year, he won the penalty against Australia in the last 16, won the game for his side against Germany in the semi-final and scored the winning penalty against France in the final.