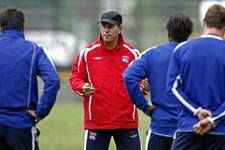 The OL manager makes his first review after 5 days with the Olympiens. He discusses Tignes, the atmosphere in the squad, the captaincy and transfers.
THE SQUAD

The atmosphere in the squad
I met the squad at the beginning of the week. I’m transparent with them, I’m not playing a role. It should be a mutual discovery between the players and the manager, not a fenced-off arrangement. The only star here is the entire team. The qualities of individuals will help us in matches, in the locker rooms, with the ambience in the squad… there is room for everyone in this team: for the warrior, the leader and the livewire…

The captain
I’ll put my cards on the table for you. We had a chat this morning about the squad and the team, and it came out that Juninho doesn’t want the captain’s armband any more, even though I think he has the profile to be a good captain.
This is how I see things: a captain’s not enough, I need leaders. At Sochaux I had a choice (Brechet, Pitau…). Being captain represents something that must be supported by many players and not just one.

My philosophy is such that I won’t make Coupet the captain, because I think an outfield player should have the role. We all need to talk together to find a solution. First of all I want to explain to the players the way I see the captaincy and what I feel the armband represents[IMG42234#R] and requires. Generally managers prefer technically strong captains, like Juninho. But you can also choose the warrior, the heart of the team or the most confident player… in any case, we have a choice. Squillaci could be a good captain, as could Govou should he win more game time. Toulalan is lacking slightly in terms of charisma, Müller has already worn the armband and Cris is also a possibility…

Govou-Juni
A discussion was necessary to see how deep this thing went. Things were sorted out. I took it as a warning sign and not a personal attack on Juninho.
Everything is going well in the locker room, we’re turning a new page, opening a new book. What happened last year is… last year’s news.

The left flank
The arrival of Grosso is excellent news. In the beginning I wanted to keep Abidal and there seemed to be no other solutions in France. When the chance came to sign Grosso, we didn’t hesitate. He is a good player and also he speaks French, and as you know, in the defence, communication is everything. Further forward, I wanted to give some game time to Hatem Ben Arfa, a promising, talented player from an excellent generation (Benzema, Nasri, Menez…). Is he mature enough? No, not quite, but it’s time he took it to the next level. At Lyon, he had a tough job with Malouda, an international, in his way. His departure has been no surprise. I simply thanked him for what he had brought to the club in his 4 years.

Centre-forwards
We have 3 centre-forwards (Benzema, Baros, Fred) plus other layers who can play there if necessary. The polyvalence of players like Ben Arfa, Keita and Govou means we have cover for the position. As for Fred, I have no information on the state of his injury. I would like to know how long he will be out for.

Tignes
It’s all going well, we’re very happy with our preparations. The players have responded beyond our expectations. On-field conditions have been tough but we got through the whole programme, with a few minor adjustments. I’m also very happy with how the players behaved.

Korea
It’ll allow us to continue our preparations in terms of positioning while still having a tournament atmosphere to make the most of. I’m planning on rotating the squad quite heavily from match to match in order to see different players with different challenges in different roles. Different combinations. China has been cancelled, which means we’ll be home 3 or 4 days earlier than planned, but that’s fine.

The pressure
It’s also on the players. The older players will fill the newer ones in on what the pressure is like at this club. For them, ambitions have changed, and as Grég Coupet said so well, that in terms of pressure, they’re going from being the hunter to being the hunted. A good image.